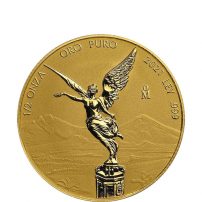 The Reverse Proof Mexican Gold Libertad’s debut in 2018 gave the Mexican Mint three versions of the Gold Libertad coins to offer investors and collectors. The collection of Gold Libertads first debuted in 1981, but production in any version of the coin was sparse until the 21st century when the BU and Proof coins became annual issues. So far, the Reverse Proof Gold Liber... Read More 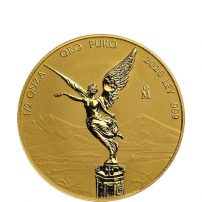 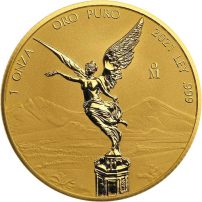 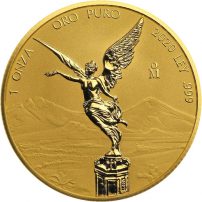 Mexican Gold Libertad Coins were first issued by the Mexican Mint in 1981. The series was a direct descendant of the 1921 Gold Centenario. The latter coin was the first in Mexican history to feature an effigy of Winged Victory, the glorious symbol of Mexico’s revolutionary victory against Spain. The modern Gold Libertad Series has a modified depiction of Winged Victory a... Read More

2018 was a year of big changes for the Mexican Mint and its Libertad Series coins. Not only did the mint introduce a new Antique Silver Libertad, it also introduced a Reverse Proof Gold Libertad for the first time in the program’s history. The reverse proof Gold Libertad debuted in 2018 with only a 1 oz gold and 1/2 oz gold option available. Both coins have frosted background fields beneath clear, mirrored design elements. Reverse proof finishes such as these create beautiful visual contrast when viewing the coin’s design elements. The Reverse Proof Gold Libertad coins are all packaged individually inside of protective plastic capsules. The 2018 debut included mintages of 1,000 coins per weight, with the 2019 coins cut in half to just 500 coins each.

On the obverse side of the Reverse Proof Mexican Gold Libertad Coins, you will find the towering depiction of Winged Victory. The design on the Libertad coins from the Mexican Mint replicates the appearance of the 22-foot tall statue of Winged Victory found atop the Mexican Independence Victory Column that was erected in Mexico City in 1921 to mark 100 years of independence. The design includes the volcanic peaks of Popocatepetl and Iztaccihuatl in the background.

The Mexican Mint introduced the first Mexican Gold Libertad coins in 1981. The Gold Libertad has, however, had a rockier production history than its Silver Libertad counterpart. The Gold Libertads were offered in 1/4 oz, 1/2 oz, and 1 oz weights in 1981 and not offered again until 1991. At that point, the coins were made available in two additional fractional-weights and have been available since that time.

Get the Reverse Proof Gold Libertad from JM Bullion

Please don’t hesitate to ask questions when you shop for gold. You can call us on the phone at 800-276-6508, chat with us live online, or simply send us an email with your inquiries about these gold coins.