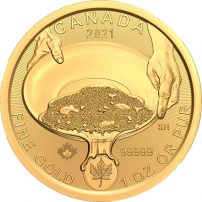 Canada experienced its own version of the California Gold Rush in 1896 when gold was discovered in the Yukon Territory of northwestern Canada. Over the course of a three-year period, the landscape of Canada changed as thousands migrated west in hopes of striking it rich. The Royal Canadian Mint carries on Canada’s gold tradition to this day with its beautiful and impress... Read More

The Royal Canadian Mint is famous for the purity of gold used in its coins. The Canadian Gold Maple Leaf is regularly issued with .9999 pure gold content, and for special occasions, has been issued with .99999 pure gold. This is the highest level of purity available in modern gold bullion coins. From time to time, the Royal Canadian Mint also issues .99999 gold coins as part of commemorative collections. The latest from the mint is the Klondike Gold Rush Series and it honors one of the most important moments in Canadian history.

The Royal Canadian Mint is again rolling out .99999 pure gold coins in this new series marking the 125th anniversary of the discovery of gold in the Klondike region of the Yukon Territory. Each of the 1 oz gold coins with .99999 pure gold content bear the highest denomination issued on Canadian gold coins, with a face value of $200 (CAD). The coins come with radial lines in the background fields and a laser micro-engraved maple leaf privy mark on the reverse. This privy mark features the final two digits of the date mark, with those numbers visible only under magnification. The coins are offered by the Royal Canadian Mint inside of credit-card-sized assay cards and come in Brilliant Uncirculated condition.

The Royal Canadian Mint is planning several designs to honor the 125th anniversary of the gold rush that drew thousands to the far-western reaches of Canada. While the obverse of each coin will feature the current effigy of Queen Elizabeth II on the obverse. This design was created in 2003 by Susanna Blunt and offers a right-profile portrait of Her Majesty that features on all Canadian coinage. On the reverse of each coin, the Royal Canadian Mint will offer up new designs celebrating the Klondike Gold Rush. These designs include:

History of the Klondike Gold Rush

Gold was first discovered in the Klondike region in what was then known as Rabbit Creek. This discovery was made in August 1896. Within a year, news of the discovery reached the American cities of Seattle and San Francisco. The discovery of gold in the region drew Canadians from the established provinces in the east and Americans from the west coast of the United States to the rugged Yukon Territory. Overnight, small towns that once had populations around 500 people had swelled to host as many as 30,000 residents. The Klondike Gold Rush lasted roughly three years. By 1899, another gold discovery in Nome, Alaska, drew away many of the prospectors that had moved to the Yukon Territory in hopes of another opportunity to strike it rich with gold mining.

The Royal Canadian Mint is reserved in its use of .99999 pure gold in its bullion coins. Now is your opportunity to collect impressive, high-quality gold coins with unique reverse designs. If you have any questions, please feel free to ask. JM Bullion customer service can assist you at 800-276-6508, online through our live chat, and using our email address. For questions about our payment methods, please visit our Payment Methods FAQ.