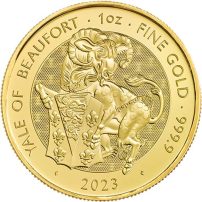 Any quantity available for $79.99 per coin over spot!

The new Tudor Beasts Series from the Royal Mint of England moves on with the 2023 release to offer the image of a familiar beast. Those who followed the previous Queen’s Beast Series from the mint. The Yale of Beaufort represents a powerful family from histo... Read More 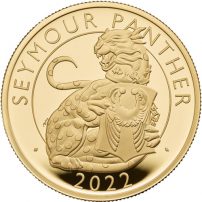 Within the Tudor Beasts Series, the Royal Mint offers collectors the chance to buy gold and silver. The proof coins in this series include four silver options and three gold coins, with the smallest of the gold coins being the 1 oz option. Now, 2022 1 oz Proof British Gold Tudor Beasts Seymour Panther Coins are available to you for purchase online from JM Bullion. Coin ... Read More 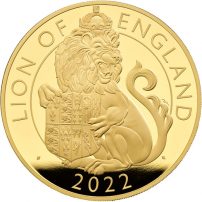 The new Tudor Beasts Series from the Royal Mint of England features gold, silver, and platinum coins for investors and collectors. The BU range offers all three metals in limited weights, while the Proof range offers more weights to choose from that are limited to silver and gold coins for sale. Today, 2022 1 oz Proof British Gold Tudor Beasts Lion of England Coins are ava... Read More 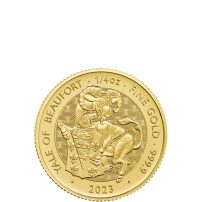 In the British Tudor Beasts Series, the Royal Mint offers gold, silver, and platinum bullion coins to investors. Within the BU range of coins in this series, only the gold coins for sale come with a fractional-ounce option. The silver collection offers 2 oz and 10 oz options, while the platinum coin comes only in a 1 oz weight. Now, 2023 1/4 oz British Gold Tudor Beasts Ya... Read More 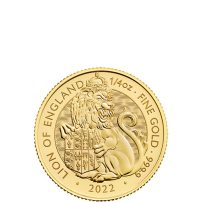 The new Tudor Beasts Series from the Royal Mint follows in the format of the Queen’s Beast Series the mint issued from 2016 to 2021. In this collection, the various heraldic beasts from the famous Tudor Dynasty feature alongside various iterations of the Royal Arms and personal crests of figures from this dynasty. The coins are offered in the same BU options as the Queen... Read More 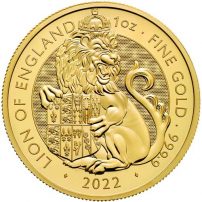 The Tudor Beasts Series from the Royal Mint is a successor to the popular Queen’s Beast Series. The latter series ran from 2016 to 2021 and covered heraldic beasts introduced to the Royal Arms between the 12th century and the 17th century. The new Tudor Beasts Series focuses on the prominent, well-known monarchs of the Tudor Dynasty in the late-15th century and the entir... Read More

The Royal Mint of England has an all-new collection of silver and gold coins for sale celebrating the history of the monarchy. Unlike the previous Queen’s Beasts Series from 2016-2021, the new Tudor Beasts Series focuses on the infamous Tudor dynasty that ruled the throne of England from 1485 to 1603. Producing some of the most well-known monarchs in British history, this series offers a beautiful look at the Tudors.

Like the Queen’s Beast Series before it, the Tudor Beasts Series has familiar packaging options for each BU and Proof design issue in the series. The BU Gold Tudor Beasts come with 1 oz gold and 1/4 oz gold options. The 1 oz gold coin ships individually in plastic flips, with multiples in acrylic tubes of 10 gold coins and Monster Boxes of 100 gold coins. The 1/4 oz gold coin is similarly offered individually in flips, with plastic tubes of 25 coins and Monster Boxes of 500 coins.

Proof Gold Tudor Beasts come with individual packaging. The coins are encapsulated and packaged in wooden presentation boxes. The box ships in a themed outer shipper and comes with a Certificate of Authenticity.

The designs in the Tudor Beasts Series are inspired by the stone statues that line Moat Bridge, the entrance to Hampden Court where the Tudor monarchs held court. The first creature depicted in the series is the Seymour Panther. This heraldic beast was gifted to Jane Seymour as she married King Henry VIII. The third wife of King Henry VIII, Jane Seymour famously gave birth to the only son of Henry VIII who would live to sit on the throne, albeit briefly. The Seymour Panther has a spotted frame with flames emanating from the mouth and ears. The panther supports a shield that has the Seymour Wings on its face.

For the second design of the Tudor Beasts Series, the Royal Mint features the image of the mighty Lion of England. The crowned lion is shown in a seated position behind a shield that bears the impaled arms of King Henry VIII and Jane Seymour, his third wife. The shield features the Royal Arms of King Henry VIII on the left, with the personal coat of arms of Jane Seymour on the right.

Previously featured in the Queen’s Beasts Series, the Yale of Beaufort returns in a custom design for the Tudor Beasts Series. This third issue of the Proof Tudor Beasts Series, second in the BU Series, comes with an image of the Yale of Beaufort on its hind legs as it supports the Arms of Jane Seymour. The third wife of King Henry VIII, Jane Seymour is said to have been Henry VIII’s most beloved wife and the Yale was chosen to support her arms as a means of legitimizing her authority as his new wife.

A Note on the Order of Tudor Beast Issues

The Royal Mint has released the initial designs in the Tudor Beasts Series in differing orders within the BU and Proof collections. The order, to date, in the Proof Series is:

Conversely, the first BU issue of the series is the Lion of England, followed by the Yale of Beaufort. The complete list of heraldic beasts to feature in the Tudor Beasts Series includes (in no particular order):

King Henry VII was the first monarch of the Tudor Dynasty. He came to the throne by defeating King Richard III of the House of York in 1485 at the Battle of Bosworth. The victory ended the Wars of the Roses between the House of York and the House of Lancaster, the latter of which Henry was a member of at the time. He formed the House of Tudor with his marriage to Elizabeth of York, a move that aimed to unify the former warring parties. Henry VII is not remembered by history as much as his son, King Henry VIII, and his granddaughter, Elizabeth I.

Please feel free to reach out to JM Bullion with any questions about the Tudor Beasts coins. Our team can assist you on the phone at 800-276-6508, chat with you live online, or respond in writing via email. Don’t forget, you can visit our Payment Methods page at any time to learn about applicable discounts, maximums/minimums at purchase, and acceptable forms of payment.