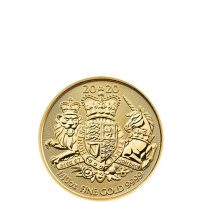 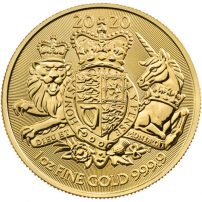 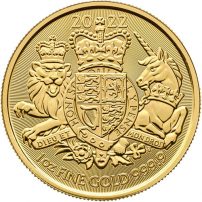 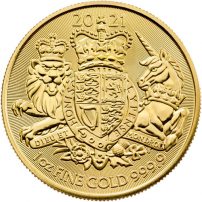 The Royal Mint of England is one of the oldest and most respected mint facilities in the world. The history of the Royal Mint dates back to the 9th century AD when Danish Vikings still controlled portions of the British Isles, including the original London Mint location. A beautiful new series of coins was released by the Royal Mint in 2019 featuring one of the most important emblems of the nation, the Royal Arms of England. In the paragraphs below, you will learn about the initial gold release, upcoming expansions to the collection, and the history of the Royal Arms.

The 2019 release of the 1 oz British Gold Royal Arms Coin included only a 1 oz gold option in Brilliant Uncirculated condition. This investment-grade coin is available to purchase inside of either an individual protective plastic capsule or a mint tube of 10 coins. Each individual coin has 1 Troy oz of .9999 pure gold and a face value of 100 Pound sterling (GBP) that is fully backed by the British government. The coin has two different background field design elements. On the reverse side, radial lines are featured. The obverse field has the Royal Mint’s guilloche background design element that reflects the appearance of a braided rope.

The obverse side of all 2019 British Gold Royal Arms Coins comes with the latest fifth-generation portrait of Queen Elizabeth II. Her Majesty is depicted in right-profile relief with the George IV State Diadem Crown on her head. The George IV State Diadem features alternating crosses in its design with a combination of roses, thistles, and shamrocks. The combined rose-thistle-shamrock design reflects the flowers of England, Scotland, and Ireland, respectively. Inscriptions on this face of the coin include the designer’s initials, “JC,” below the Queen’s neck, “D.G. Reg F.D.,” “100 Pounds,” and “Elizabeth II.”

On the reverse face of the 2019 British Gold Royal Arms is a distinctive interpretation of the modern Royal Arms of England. In use since the start of Queen Victoria’s reign in 1837, the shield is quartered and features representative symbols of Northern Ireland, Scotland, and England, the three independent nations of the United Kingdom. The upper-left and lower-right quadrants feature the famed Three Lions of England, the first official Royal Arms of England. The lower-left quadrant has the Harp of Ireland, representing Northern Ireland. The upper-right quadrant features the rampant Lion of Scotland from the royal arms of Scotland first adopted by the King of Scots in the 12th century.

The shield is crowned by the royal crown known as the St. Edward’s Crown. Named for King Edward the Confessor, the last Anglo-Saxon king of England, the crown is worn only once by the monarch at his or her official coronation ceremony. The modern crown has been around since 1661 and was designed by Sir Robert Vyner. It was last modified in 1911 to include 444 precious and semi-precious stones, but includes no diamonds. This particular version of the crown has been worn by only three monarchs: Queen Elizabeth II, her father King George VI, and her grandfather King George V.

Other important aspects of the design include the supporting animals. Since the ascension of King James VI of Scotland to the throne of England, which he would rule as King James I, the Royal Arms of England has been supported by two heraldic beasts. The Lion of England supports the shield on the left, while the Unicorn of Scotland supports it on the right.

History of the Royal Arms of England

Prior to the rise of the Plantagenets as kings of England in the 12th century, early versions of an English royal arms came from Danish Vikings, Saxons, and Normans. Lions were popular animals in the use of the royal arms throughout the eras of Danish, Saxon, and Norman rule in England, but it was the second Plantagenet king, King Richard I, who is credited with the first official Royal Arms of England. Early in his reign, shields with one or two lions in rampant poses were used on the seals of Richard I. Late in his reign though, in 1198, the first official Royal Arms of England emerged as a shield with a red field and three golden lions in a passant guardant pose. A lion in passant guardant has three paws on the ground with the right forepaw raised and its head turned looking at the viewer.

Over the course of hundreds of years, the Royal Arms of England has changed to reflect claims to various other thrones and the formation of the United Kingdom. For example, King Edward III was the first to adopt a quartered shield in 1340 when he added the French fleur de lis in two quadrants alongside the Three Lions in the other quadrants. This was done to support his claim to the French throne. French symbolism remained in the Royal Arms of England through the 19th century when King George III maintained it in his Royal Arms until 1801.

As mentioned earlier, today’s modern Royal of Arms of England was modified in 1837 for Queen Victoria. The French symbolism had disappeared three decades earlier and the temporary use of the Hanoverian arms within the shield also ceased.

Investing in the British Gold Royal Arms from JM Bullion

Please don’t hesitate to reach out to JM Bullion if you have any questions about the British Gold Royal Arms products. You can call us on the phone at 800-276-6508, chat with us live online, or email us directly.