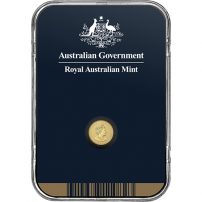 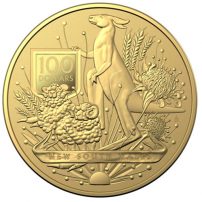 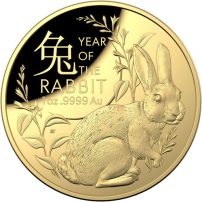 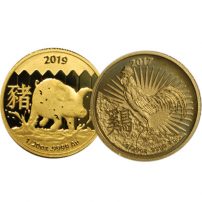 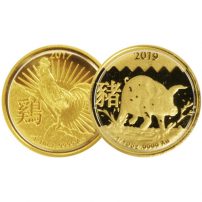 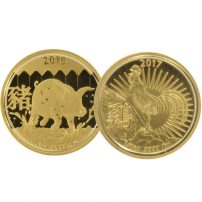 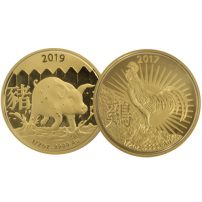 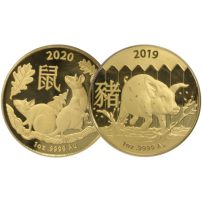 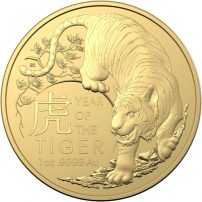 2022 1 oz Royal Australian Mint Gold Year of the Tiger Coin (BU)
As Low As:
Out of Stock 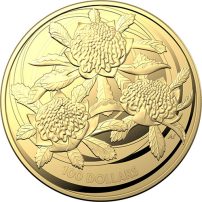 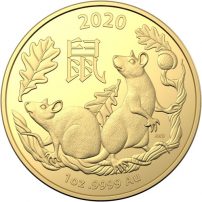 2020 1 oz Royal Australian Mint Year of the Rat Gold Coin
As Low As:
Out of Stock

There’s nothing more popular right now in the precious metals industry than gold bullion coins. Available from private and sovereign mints around the globe, gold coins feature a variety of designs that typically include elements that celebrate national icons, historic images, or wildlife themes. The Royal Australian Mint, the nation’s official sovereign mint, strikes a kangaroo-themed coin on an annual basis. For 2016, an exciting new gold coin design is available from the mint with a design culled from the history of Australian currency.

Starting in 2003, the Royal Australian Mint began to strike its popular kangaroo coins in a gold plated version as well. The depth and history of the gold coin is not as rich as the silver variant, but its rising popularity makes it a must-have coin for many collectors and investors. One of the major differences between the silver and gold coins is the issuance of different sizes.

The silver coins feature only a 1 oz version, while these 2016 Royal Australian Mint Gold Kangaroo Coins are available in a total of four weights: 1 oz, 1/2 oz, 1/4 oz, and 1/10 oz. So, why is the kangaroo one of the most popular designs on Australian coins?

Kangaroo: The Icon of a Nation

Animal species of the world are not evenly spread, and some occur solely on specific continents or in tightly-packed regions of the world. Marsupials are a species of animals unique to the South Pacific, and are divisible (generally speaking) into three identifiable species. Wallabies and wallaroos are common in Australia, but the kangaroo is the largest animal in the marsupial species.

Kangaroos are classified into four subspecies on the Australian continent, and include the antilopine, red, eastern grey and western grey kangaroo. The name for the species first appeared as “kanguru,” and was recorded by British explorers in 1770 near the modern-day site of Cooktown. It was here that famous British explorer Sir James Cook and his crew were shipwrecked for several weeks as repairs were made to their vessel after striking the Great Barrier Reef.

Once approaching the level of endangered, the Australian government recorded 34.3 million kangaroos living in commercial harvesting areas. This represented a significant jump from 25.1 million the year before. The kangaroo has become, overtime, not just the most easily identifiable species from the continent on the global stage, but has achieved status as an icon at home.

The kangaroo is considered an unofficial symbol of the Australian government, appearing on the coat of arms and various forms of currency over the years. It is also the logo of many popular national and governmental organizations, such as Qantas Airlines and the Royal Australian Air Force.

Like many of the worlds other popular bullion coins, the 2016 Royal Australian Mint Gold Coin features a popular image from the history of the mint. In 1911, the Commonwealth of Australia released a new copper penny for use in the nation as it transitioned from colony to federal republic. Copper pennies from the mint were struck with a common obverse theme of monarch portraits, featuring (in order) King George V, King George VI, and Queen Elizabeth II.

Starting in the middle of King George VI’s reign, the reverse side of the coin began to feature the image of a hopping kangaroo along with the star of the commonwealth. The coin remained in circulation in Australia through 1964 when the nation transitioned to decimalization in its currency. The use of this particular penny design ended that year, which was the same time the Royal Australian Mint formed.

On the reverse side of the 2016 Royal Australian Mint Gold Kangaroo coin you’ll find the original design elements from the copper penny. In the middle of the field is the image of the hopping kangaroo, which appears heading from right to left across the design set. The star of the commonwealth is also featured on this coin design. Additional elements include the use of leaves encircling the design that come from the Tasmanian Blue Gum. Engravings include the nation of issue, year of issue for the coin, and the coin’s weight, purity, and metal content.

The obverse design features the right-profile portrait of Queen Elizabeth II. Her Majesty’s image has appeared on Australian currency since she ascended to the throne in 1952, and this design from Ian Rank-Broadley represents the fourth-generation portrait used on commonwealth currency since 1952. Rank-Broadley designed this image in 1998.

Each 2016 Royal Australian Mint Gold Kangaroo coin contains .9999 pure gold content, with face values listed in Australian Dollars (AUD). Since these coins are available in four weights, there are differing values that include the following:

Royal Australian Mint coins come from the official sovereign mint of the Australian nation, and represent official coinage of the federal government.

JM Bullion makes it easy for all investors and collectors to purchase Royal Australian Mint gold coins from our online catalog. We accept various payment methods to complete your transaction. Our easiest methods of payment are PayPal and bank wire transfers. Both payment methods offer instant processing, which releases your purchase to our fulfillment queue rapidly. You can also pay for your Royal Australian Mint gold coins using Visa and MasterCard credit/debit cards, or pay using a personal check. The latter option takes 4 to 6 business days to process, while credit/debit cards process within one business day in most cases.

We’re proud to offer free shipping and insurance on products purchased from our online catalog. Your bullion and proof coins ship in discreet packaging via the United States Postal Service or UPS, and if your package becomes lost or damaged during shipment, JM Bullion is here to help. We’ll work with the carrier to recover your shipment if it is lost, provide you with replacement products if possible, or refund your purchase price if that is not possible.

JM Bullion encourages all of our shoppers to contact us with questions. If you have any inquiries about the 2016 Royal Australian Mint Gold Kangaroo or other Royal Australian Mint gold coins, please don’t hesitate to reach out to us. You can contact a JM Bullion associate on the phone at 800-276-6508, online using our live web chat feature, or by submitting those inquiries to us in writing via our email address.