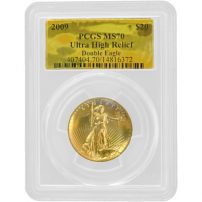 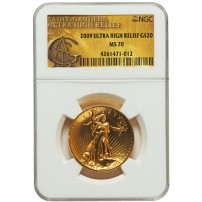 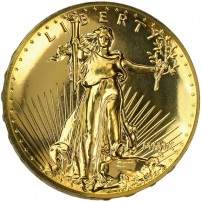 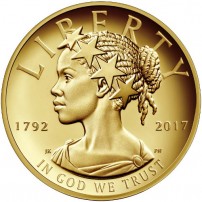 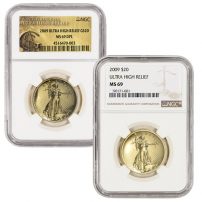 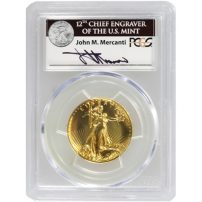 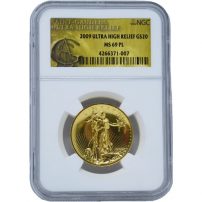 It took just one man and one coin to change the course of American coining history for the better. Disappointed with the lackluster state of affairs in American coin design, President Theodore Roosevelt set out on a campaign to overhaul the design features commonly used on American coins. To achieve his goal, he selected artist and sculptor Augustus Saint-Gaudens to help try and change history. The $20 Gold Double Eagle Coin Saint-Gaudens designed is still considered the most beautiful coin design in the nation’s history, and the United States Mint was finally able to realize his full vision for the coin in 2009 with the release of the Ultra High-Relief Gold Eagle.

In 1905, President Roosevelt asked an aging Saint-Gaudens to help him in his quest to redesign the face of American coins. The creation that Saint-Gaudens came up with was originally intended to be struck in a high-relief version, where the images of Lady Liberty and the bald eagle on the reverse would appear raised above the background fields of the coin.

However, a number of issues prevent Saint-Gaudens’ dream from being realized. For starters, the United States Mint lacked the technology at that time to fully realize the high-relief vision of Saint-Gaudens. Those coins that could be struck in high relief required 11 strikes from the coining press just to get the images into high relief, and the coins were inconvenient in that relief for packaging and shipping.

The original coin underwent a few changes to Saint-Gaudens’ original design. For starters, the original coins featured a date mark in Roman numerals. Starting in 1908, the Roman numerals were replaced with Arabic numerals for the date mark. After 1908 coins were struck, Congress passed legislation mandating the addition of the motto “In God We Trust” to the reverse side of the $20 Saint-Gaudens Gold Double Eagle. In 1912, another minor design change had to be made to recognize the addition of Arizona and New Mexico to the Union.

In 2009, the United States Mint brought Saint-Gaudens’ original vision for the Gold Double Eagle to life by releasing an Ultra High-Relief Gold Double Eagle coin. Each of the coins was struck with 1 oz of .9999 pure gold and issued a face value of $20 (USD) that was fully backed by the federal government.

The US Mint originally announced an unlimited mintage would be in place for these coins. As long as demand existed, the Mint would strike these stunning coins. Each coin was 4mm deep and struck under great pressure to bring the ultra high-relief finish to life on the surface of the coin. Viewed from various angles, the design sets on both sides appear to rise up slightly from the concave background fields that sink away from around the image.

In September 2009, the US Mint removed its one coin per person ordering restriction, which helped boost final mintage for the coins to 115,178 in total. The design features of the new Ultra High Relief Gold Double Eagle had a few minor variations on the original image created in 1907 and modified in subsequent years during its original circulation run.

On the obverse side of the coin is Saint-Gaudens’ depiction of Lady Liberty. In his vision, Lady Liberty is featured striding confidently forward out of the setting sun. The nation’s capital of Washington D.C. is visible at her feet, and she holds a torch aloft in her right hand as a guiding light while she directs the nation to a brighter future. The olive branch in her left hand signifies America’s desire for peace.

In the original image, Liberty is surrounded by 46 stars representing the states in the Union at the time Saint-Gaudens’ designed the coin. As mentioned earlier, two stars were added to the coin in 1912 with the admittance of Arizona and New Mexico to the Union. For the 2009 Ultra High Relief Gold Double Eagle, two more stars were added to represent the addition of Alaska and Hawaii to the Union in the years following World War II.

Instead of placing these stars on the coin’s concave surface, the US Mint put all 50 stars around the coin’s 4mm-deep edge. Another subtle change was the use of Roman numerals, as originally intended by Saint-Gaudens, rather than Arabic numerals for the date mark. “MMIX” is visible on the coin’s obverse side.

The image on the reverse side of the coin remains unchanged from that adopted by the United States Mint on the original Saint-Gaudens Gold Double Eagle in 1908. Along the bottom of the coin, the sun can still be seen rising over the horizon, with the motto “In God We Trust” along its edge. A bald eagle flies majestically over the rising sun, with the engravings “United States of America” and “Twenty Dollars” above the eagle.

There are a number of brilliant uncirculated and certified Ultra High Relief Gold Eagles available for purchase on JM Bullion. Coins that have been graded by either the Numismatic Guaranty Corporation or Professional Coin Grading Service are considered certified coins because their condition has been verified by some of the finest coin graders in the world.

You’ll see some terms associated with those certified coins that you may be unfamiliar with. We’ve included a brief description of those terms below for your convenience:

JM Bullion proudly offers free standard shipping and insurance on all purchases over $199, and ships via the US Postal Service or UPS. If you’d like to upgrade to expedited shipping, you may do so while checking out for an extra fee. If your shipment is lost or damaged while in transit, you are eligible to receive replacement products or a full refund of your purchase price. A tracking number will be provided to you via email within 24 hours of your shipment departing our warehouse.

Please feel free to contact JM Bullion with any questions you might have about this or any other product we offer. You can reach a JM Bullion associate on the phone at 800-276-6508, online using our live web chat, and via email.