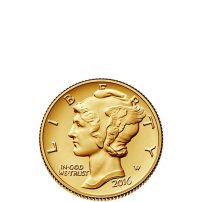 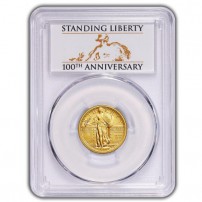 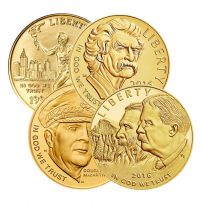 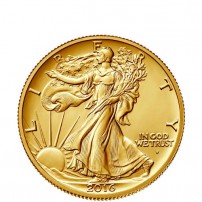 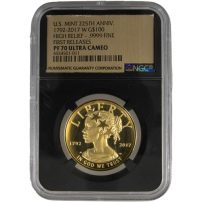 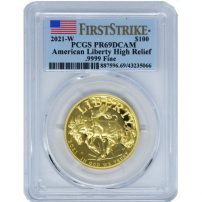 Most modern numismatists will likely never live long enough to see another year from the United States Mint that is more monumental and historic in nature. At first glance, 2016 marks the 30th anniversary of the ever-popular American Eagle coin series, which is the nation’s official gold and silver coin collection.

Dig a little deeper, and you’ll find that 2016 also marks the centennial celebration of not just one, but three historic coin designs that have long fascinated collectors. Beginning in April 2016, and continuing throughout the year, the United States Mint released a series of 24-karat gold coins to commemorate the 1916 introduction of the Winged Liberty/Mercury Dime, Standing Liberty Quarter, and the Walking Liberty Half Dollar.

These coins helped change the image of American coin design forever, and remained stalwarts in circulation as US currency throughout the Great Depression and World War II. Today, the US Mint honors each design with a brilliant new release that recreates the original splendor of each of the three designs.

During the first two decades of the 20th century, the United States Mint embarked on a mission to revamp and redesign all of its circulation currency. The drive started in 1905 under the guidance of President Theodore Roosevelt, who personally elicited the help of famed Irish-American artist and engraver Augustus Saint-Gaudens.

Eventually, the drive to revamp coin design would come to each of the nation’s circulation coins at the time, including the commonly used half-dollar, quarter, and dime available in the day. In the case of most of the US’ circulation coins of the day, US Mint Chief Engraver Charles E. Barber was the man responsible for the designs in circulation. However, Barber’s designs originated in 1892 or 1895 (depending on the coin), and were viewed as outdated.

As fortune would have it, the half dollar, quarter, and dime were all redesigned and sent out into circulation in the same year, 1916. Adolph A. Weinman was the man behind the Winged Liberty/Mercury Dime and the Walking Liberty Half Dollar, while Atkins MacNeil created the Standing Liberty Quarter.

Overview of the 2016 Gold Centennial Series

In honor of the momentous occasion, the United States Mint has designed and struck a series of three all-new gold coins commemorating each of these beloved designs. While the specific coins will have different design features on their obverse and reverse sides, the overall series will share a variety of other features.

First and foremost, the US Mint plans to strike just 125,000 coins for each design, meaning you can expect these coins to sell out from the mint rapidly. Each coin will feature 24-karat gold and feature a face value representative of the original circulation coin. For example, the 2016 1/10 oz American Gold Mercury Dime will have a $.10 (USD) face value. Additionally, the coins will have a weight in Troy ounces indicative of its original size and face value. The Gold Mercury Dime will have 1/10 troy oz; the Gold Standing Liberty Quarter will have a ¼ troy oz weight; and the Gold Walking Liberty Half Dollar will feature ½ troy oz.

All coins in the series initially ship from the United States Mint encapsulated in a black, matte hardwood display case with a Certificate of Authenticity to verify the coin’s status. For graded specimens, both the Professional Coin Grading Service and the Numismatic Guaranty Corporation introduced special 100th Anniversary Labels to accompany graded coins inside the company’s respective plastic slabs.

The first coin released came out in April 2016, and honored Adolph A. Weinman’s Mercury Dime. The original Mercury Dime was officially known as the Winged Liberty Dime. The coin earned its nickname as the Mercury Dime because Weinman’s depiction of Liberty wearing a Phrygian cap was confused by many with the image of the Roman messenger god, Mercury.

Weinman’s original design featured a left-profile portrait of Liberty wearing the Phrygian cap on the obverse side of the coin. The word “Liberty” was engraved above her head, with “In God We Trust” and the year of issue featured below.

On the reverse he chose to pair a Roman fasces with an olive branch for the primary design. The fasces is a symbol of unity and strength, while the olive branch is well-known as a symbol of peace. The combined symbolism represented America’s military power and readiness to defend itself, but its desire to exist in a world of peace. Engravings on this face included “United States of America,” “E Pluribus Unum,” and “One Dime.”

The original Mercury Dime was in circulation from 1916 to 1945. It was replaced as the design of the dime quickly following the death in office of President Franklin D. Roosevelt. The dime was chosen by the federal government, Secretary of the Treasury, and US Mint because of President Roosevelt’s prominent March of Dimes program.

As the second release in the 2016 American Gold Centennial Commemorative Coin Series, the 2016 American Gold Standing Liberty Quarter honors Hermon Atkins MacNeil’s 1916 depiction of Lady Liberty standing guard for the United States of America. His unique design featured a full-length, frontal depiction of Lady Liberty standing in the gap of a wall with a shield in her hand.

On the obverse face of the original Standing Liberty Quarter was the image of Liberty standing between that gap in the wall. MacNeil’s original design featured a bare-chested Liberty, though officials at the United States Mint later made changes to give Liberty chain-mail armor on her chest rather than bare skin.

The reverse design for the original coins featured an American bald eagle soaring in flight with its wing’s spread wide. In this design, there was a ring of 13 star representing the nation’s original colonies. Engravings on the obverse included “Liberty,” “In God We Trust” on either side of the wall gap, and the year of issue. The reverse had engravings of “United States of America,” “E Pluribus Unum,” and “Quarter Dollar.”

Standing Liberty Quarters were in circulation in the United States from 1916 to 1930. The United States Mint did not strike new quarter designs in 1931, and when the quarter was renewed in 1932, it featured a brand-new depiction of the nation’s first president. A left-profile portrait of President George Washington from John Flanagan took over as the popular design, and remains on the coin to this day.

For the 2016 American Gold Standing Liberty Quarter, the US Mint revived and modernized MacNeil’s original designs on a stunning 24-karat gold coin. The only additions to the coin are engravings of the metal content, purity, and weight on the reverse.

The final release of the series features another design from Adolph A. Weinman. This Walking Liberty image is his most famous, and featured originally on the Walking Liberty Half Dollar from 1916 to 1947. Weinman’s design depicted Lady Liberty draped in the American flag as she marched toward the setting sun with one hand outstretched, and the other holding branches of laurel and oak. The design was indicative of the nation’s march toward a brighter future, with the branches symbolizing America’s civil and military glory.

On the reverse side of those original coins there was the image of an American bald eagle perched on a cliff’s edge, ready to take off in flight if necessary. Its claws gripped an olive branch as a symbol of its grasp for peace. Weinman’s design was so popular that the Walking Liberty obverse image was put back into production 39 years after the Walking Liberty Half Dollar ceased, this time as the face of the nation’s official silver coin. Today, Walking Liberty graces the American Silver Eagle coin, the most popular single product in the world.

Weinman’s design included engravings of “Liberty,” “In God We Trust,” and the year of issue on the obverse. The reverse bore the typical markings of “United States of America,” “E Pluribus Unum,” and “Half Dollar.” The all-new 2016 American Gold Walking Liberty Half Dollar features these same engravings, and the same design features as the original coin, with the added markings of Weinman’s “AW” initials on the obverse and the coin’s metal content, purity, and weight on the reverse.

The original Walking Liberty Half Dollar remained in circulation until 1947, eventually replaced on the half dollar by the image of Founding Father Benjamin Franklin. US Mint Director Nellie Tayloe Ross, an admirer of Franklin, led the drive to replace the Walking Liberty depiction on the nation’s fifty-cent piece.

All JM Bullion shipments over $199 are sent via the USPS or UPS free of charge, including insurance, for standard shipping. You are welcome to purchase expedited shipping if you wish to receive your coins faster. Should your products go missing, we’ll work with the carriers to recover your coins. In the event that is not possible, we’ll provide you a replacement product (if available) or refund your purchase price.

If you have any further questions about the 2016 American Gold Centennial Commemorative Coins, please feel free to reach out to JM Bullion. You can contact us at 800-276-6508, connect with us online using our live chat, or email us with your inquiries.