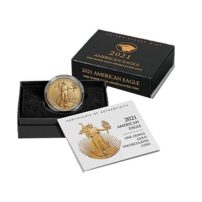 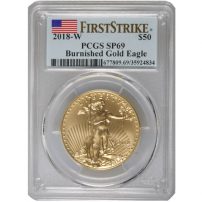 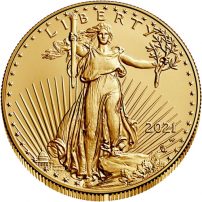 The American Gold Eagle coin series is the most popular gold coin in the United States, and is one of the most sought-after gold bullion products in the world. Produced on an annual basis by the United States Mint, the coin is available in a total of three versions: bullion, proof, and burnished. The latter version is the latest coin to be introduced, and is designed specifically for numismatists interested in displaying and exhibiting their American Gold Eagle coins.

In 1985, the United States Congress passed the Gold Bullion Coin Act to authorize the design and production of an official gold bullion coin for the nation. In the United States, Congress alone has the power to authorize the coining of money and set the face value of any new coins introduced into circulation or released as commemorative products. President Ronald Reagan signed the bill in 1985, and production occurred for the first time in 1986.

A unique requirement was added to the text of the Gold Bullion Coin Act of 1985, one which stipulates that all of the gold used in the production of American Gold Eagle Coins must come from “newly mined domestic sources.” In other words, all American Gold Eagles must be struck using only gold sourced from within the United States.

In 1986, Augustus Saint-Gaudens’ iconic image of Lady Liberty was chosen as the enduring symbol of freedom and American values to appear on the obverse side of the coin. Saint-Gaudens was an Irish-born artist and sculptor who was hand chosen by President Theodore Roosevelt in 1905 to revitalize the appearance and design of American gold coins.

By 1907, Saint-Gaudens had finalized an image of Lady Liberty for use on a new $20 Gold Double Eagle coin. In his depiction, Lady Liberty is featured striding forward from the national capital of Washington DC. Visible behind her figure is the setting sun, with the U.S. Capitol Building and other skyline features of Washington DC appearing at her feet. Clothed in a full Greek robe, she walks forward with a torch held aloft in her right hand and an olive branch in her left. The imagery is indicative of the nation’s march toward a brighter future, with hopes of peace in mind.

Sculptor Miley Busiek’s modern depiction of a family of bald eagles was chosen as the reverse design feature on the American Gold Eagle. In her design, a male bald eagle is featured swooping into the family nest carrying an olive branch in its talons. Next to the nest, a female bald eagle stands vigilant guard over the nest, which contains the family’s hatchlings.

As mentioned earlier, the American Gold Eagle Coin program consists of three different versions. The bullion and proof versions were introduced immediately in 1986 when the coin series was launched by the US Mint. Initially, only the bullion version had the coins available in all four weights. The proof version expanded to include the ½ oz weight in 1987, and again in 1988 to include the ¼ oz and 1/10 oz coins.

It wasn’t until the 20th anniversary of the American Gold Eagle coin series in 2006 that the United States Mint expanded the program to include a special burnished coin. Aimed directly at numismatists who collect and display or exhibit their beloved American Gold Eagles, the Burnished American Gold Eagle (also referred to as an uncirculated Gold Eagle) is struck using a special coining process that is similar to the one used in the production of proof coins.

The United States Mint begins the coining process for burnished gold eagles by loading all of the blanks, known as planchets, into a spinning drum. In the past, this step in the process used wet sand as a friction agent that served as a polishing media to give the blanks a unique finish before even being struck. Today, the US Mint uses countless 6mm balls to create a smooth, matte-like finish on the surface of the blanks.

Once each blank has been sent through the spinning drum, the individual blanks are taken out one at a time by mint employees wearing white gloves. The blanks are transferred by hand, wearing gloves, to the coining press in order to avoid contaminating the finish of the blanks with oil and dirt from human skin. Each blank is then hand loaded into the coining press for striking. All blanks are struck under greater pressure than bullion coins and regular circulation currency, creating a striking finish.

Although the Burnished American Gold Eagle undergoes a similar coining process to proof coins, the appearance of these coins is often compared more closely to that of the bullion coin in the series. The polishing process the coins go through before striking, along with the higher pressure coining process, leaves each coin with a softly frosted appearance. The process also creates a more detailed appearance to the design features, such as Lady Liberty and the bald eagles on the reverse.

Each design set’s frosted finish gives it the appearance of floating above the background field of the coin, which is deeply-mirrored. The major distinguishing characteristic for the casual observer is the presence of a mint mark on the Burnished Gold American Eagle. While the bullion coins do not feature a mint mark, all burnished gold eagles have a “W” mint mark to identify the West Point Mint as the production facility.

Introduced in 2006, the Burnished American Gold Eagle has seen irregular production during its nine-year production cycle. When the coins were first struck and released, the burnished coin was available in all four weights. The United States Mint never intended to strike burnished gold eagles to compete with the bullion coin in terms of total volume.

By the time burnished gold eagles entered the program, the 1 oz and 1/10 oz coins had become the most popular in both the bullion and proof versions. As such, in the first year of production roughly two-thirds of Burnished American Gold Eagles produced were either 1 oz (45,053) or 1/10 oz (20,643).

For the next two years, the 1/10 oz coin was the favored weight in the series. The 1/10 oz coin was struck in almost double the number of the other two fractional-weight coins, and outpaced the 1 oz by roughly four-thousand coins.

When you purchase a Burnished American Gold Eagle from JM Bullion, it’s important to understand the packaging you are going to receive your coin in. Once the coins have been struck in a coining press, they are removed one at a time by hand and inspected. After each coin passes inspection it is encapsulated in plastic at the United States Mint. Each of the burnished gold eagles is then placed into a protective outer box and shipped to distributors with a Certificate of Authenticity. This level of care and quality inspection is reserved specifically for the Burnished American Gold Eagle, and your coin will arrive in this condition.

JM Bullion proudly accepts a variety of payment methods for the Burnished American Gold Eagle you purchase. We accept Visa and MasterCard credit/debit cards, with an average one-business-day processing time. Bank wire and PayPal transactions are processed immediately, releasing your coins into our shipping queue the fastest. Paper check payments are accepted, but take an average of four to six business days to process. Both paper check and bank wire transactions quality for a 4% discount.

If you have any questions about the Burnished American Gold Eagle, don’t hesitate to reach out to JM Bullion. Our associates are available on the phone at 800-276-6508, online using our live web chat feature, or via email.