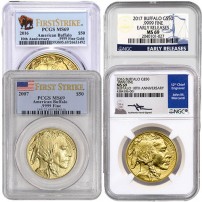 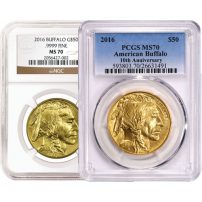 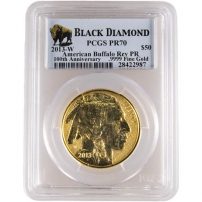 Introduced in 2006, the American Gold Buffalo coin borrows imagery from one of the nation’s iconic coins. Dating back to a period of mintage history in the US that is widely considered the Golden Age of coinage in America, the images on this coin are classic symbols of American society and culture.

Introduction to the Series

The United States Mint made the decision in the early 21st century that a 24-karat gold coin was needed in the Mint’s coinage lineup. The American Gold Eagle is struck in 22-karat gold, and though popular among numismatics, it does not compete in terms of purity with other national bullion coins like the Canadian Gold Maple Leaf.

Images used on the American Gold Buffalo represent the Golden Age of American coin design. James Earle Fraser’s Indian Head Nickel, struck between 1913 and 1938, served as the inspiration for the symbols featured on the Certified American Gold Buffalo coins. Fraser’s Indian Head Nickel featured Black Diamond on the reverse side of the coin. The bison was a resident of the Central Park Zoo in New York City during the early years of the 20th century.

The Mint also introduced an uncirculated coin in all four weights in 2008, with production levels highest for the ½ oz and 1/10 oz coins that year. The uncirculated coins, like the proof coins, bear a “W” mint mark to identify the coins as a product of the West Point Mint. Bullion coins do not bear any mint marks.

In 2013, the US Mint released a reverse proof coin with a mintage of 47,836 to honor the 100th anniversary of the original Indian Head Nickel. Through 2014, the highest total mintage of any coin was 337,012 for the 2006 bullion coin. The lowest total mintage of any coin in the series was 9,074 for the 1 oz uncirculated coin struck in 2008. The US Mint has considered adding fractional weights to the bullion coin program, but to date that has not materialized in production.

On the obverse side of each coin is Fraser’s depiction of the American Indian chieftain. Featured in a right-profile portrait, the chieftain is surrounded by the engravings “Liberty” and the year of minting. A small “F” is inscribed below the year of minting to signify Fraser as the originator of the coin’s design.

The reverse side of the coin bears the image of Black Diamond. On this side, the powerful bison is featured standing atop a small mound of dirt. Engravings include “United States of America,” “E Pluribus Unum,” “In God We Trust,” and the coin’s identifying features for numismatics. The face value of the coin, $50 USD, is also inscribed on this side.

There are numerous certification and grading services that evaluate the quality of American Gold Buffalo coins, but the Numismatic Guaranty Corporation (NGC) and Professional Coin Grading Service (PCGS) are widely considered the premier services in the industry. The most common grades from the two companies include the following:

Please contact a JM Bullion associate at 800-276-6508 if you have further questions about Certified American Gold Buffalo coins. Our associates are also available online using our live chat service and email.