Exactly 30 years ago, readers around the world were taken back in time across 65 million years of history to a time when dinosaurs roamed the Earth with the release of Michael Chricton’s epic work of fiction, Jurassic Park. The book was published in 1990 and was highly sought-after by film studios before it was even put into print. Now, three decades later that single work of fiction has spawned a total of six feature films between 1993 and the pending 2021 release of Jurassic World: Dominion. Silver enthusiasts can now invest in Jurassic Park silver with the release a new Niue silver coin. Find out more about this new limited-issue release in this week’s post from JM Bullion. 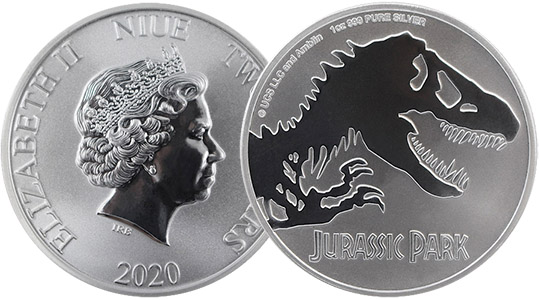 On the reverse face of the new 2020 1 oz Niue Jurassic Park Silver Coin is a depiction of the logo artwork used on the cover of Chrichton’s book and the promotional posters for the Jurassic Park feature films. In fact, this logo featured prominently within the film and other subsequent feature films in the franchise. Instantly recognizable, the design shows the right-profile bust of a Tyrannosaurus Rex skeleton. The skeletal figure has its jaw open to expose its massive, razor-sharp teeth as its short arms reach forward beneath its frame. The coin has inscriptions of the name “Jurassic Park,” along with copyright licensing information and the coin’s weight, purity, and metal content.

The obverse side of the 2020 Niue Jurassic Park Silver Coin comes with the iconic bust of Queen Elizabeth II. Her Majesty is shown in right-profile relief in a design created in 1998 by Ian Rank-Broadley for the Royal Mint of England. Widely used throughout England and the Commonwealth nations, this bust of the Queen depicts Her Majesty wearing the Girls of Great Britain and Ireland Tiara on her head. This tiara is said to be the Queen’s favorite tiara. It was gifted to her grandmother, Mary of Teck, upon her marriage to the Queen’s grandfather, the future King George V. The inscriptions on this side of the coin include the Queen’s name, the nation of issue, face value, and date mark.

The 2020 Niue Jurassic Park Silver Coin is available to you in Brilliant Uncirculated condition. Each coin has 1 Troy oz of .999 pure silver and a face value of $2 (NZD) backed by the government of Niue. The coins are packaged for shipping individually inside of protective plastic flips, by multiples of 20 inside mint tubes, and by multiples of 500 with a Monster Box. The box includes a total of 25 tubes of 20 coins. This bullion release comes with a limited mintage of only 10,000 silver coins.

Michael Chrichton may have written the Jurassic Park science-fiction novel in 1990, but it is rooted in a concept he had back in 1983. Chrichton originally developed the idea for a story about genetic engineering as a screenplay. The original story involved a graduate student who recreated a dinosaur. When he later rewrote the concept for the sci-fi novel, he focused on the topic of bringing dinosaurs back from extinction through the genetic engineering process for the purpose of entertaining the masses with a theme park centered on reanimated dinosaurs. As readers and viewers are now well aware, the experiment in genetic engineering for the purpose of entertainment goes horribly awry.

With a limited mintage and the renewed interest in the Jurassic Park franchise, the 2020 1 oz Niue Jurassic Park Silver Coin is bound to sell out quickly. If you have any questions, you can contact JM Bullion at 800-276-6508, chat with us live online, or email us directly. We always encourage our customers to follow us on Facebook and read our weekly blog posts for more information.