From its founding 1792 to 2005, the United States Mint issued millions of gold coins for both circulation use and for bullion buyers. However, during that 200-plus-year history, the United States Mint never issued a gold coin with 24-karat gold content. In 2006, that all changed with the introduction of a new gold bullion coin to offer alongside the American Gold Eagle. Like the Gold Eagle, the American Gold Buffalo featured images inspired by historic American coins, but unlike the Gold Eagle, the Gold Buffalo features 24-karat, .9999, pure gold. The latest issue of this coin is now available from JM Bullion. 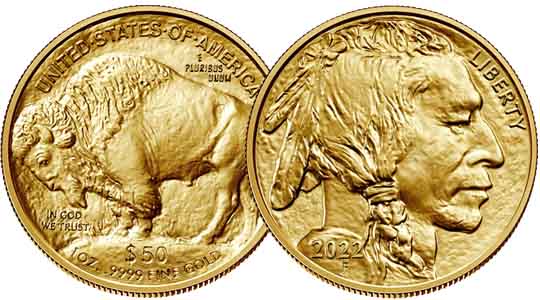 On the obverse side of 2022 1 oz American Gold Buffalo Coins is an effigy of an indigenous figure. This right-profile effigy captures the indigenous figure with a stoic appearance. He has braided hair with two feathers woven into his hair at the top of his head. The field includes inscriptions of LIBERTY along the edge of the field near his forehead and nose. 2022 is inscribed on his shoulder, with an F beneath this in honor of James Earle Fraser, the designer of the image. Fraser’s image of the indigenous figure is a composite of several tribal figures from the early 20th century, rather than a direct portrait of one individual. There are several competing stories as to who these figures were, but most accept Fraser’s own account from 1938 that he drew inspiration from Iron Tail of the Sioux, Big Tree of the Kiowa, and Two Moons of the Cheyenne. The world will never know the full truth though as Fraser himself often gave varying accounts.

The reverse side of the 2022 1 oz Gold Buffalo Coin features the design of the American bison. Fraser once said that in creating the design of the 1913 Buffalo Nickel, the coin that served as inspiration for this design, he wanted to capture images that were unmistakably American. For this field, the massive American bison is shown in left-profile relief on a small mound of dirt. The nation of issue, the national motto, and identifying hallmarks are all inscribed on the coins.

Each 2022 1 oz American Gold Buffalo Coin is available to you in Brilliant Uncirculated condition. The coins have 1 Troy oz of .9999 pure gold and a face value of $50 (USD). The Gold Buffalo comes in a protective plastic flip for individual coins and plastic tubes for multiples of 20 coins.

Background on the Series

Over the course of its history, various one-off releases have occurred. In 2008, the US Mint introduced three fractional-ounce Gold Buffalo Coins in the Proof Gold Buffalo Series but immediately suspended them the next year to ensure enough gold blanks were available for the BU and Proof coins. 2008 also saw the release of Burnished Gold Buffalos in four weights, but the coins were only available for that release. In 2013, the US Mint issued Reverse Proof Gold Buffalos in honor of the 100th anniversary of its inspiration, the 1913 Buffalo Nickel.

If you want the leading 24-karat American gold coin, the 2022 American Gold Buffalo is the coin for you. Please contact JM Bullion with any questions at 800-276-6508. We are also available to you online through our live chat and email address features. Don’t forget to follow us on Facebook as well for informative posts and links to products for sale.