Follow Sterling Into Battle In a New Form of Silver Bullion

For fans of the Silver Soldiers Series of silver statues, it was hard to ensure you got your entire platoon together before the impressive statues sold out. With limited castings for each design, you had to act fast to put together a winning team to put out on the field of battle. Fine, that field of battle may have been a shelf or a desktop, but it still mattered to have the whole team together. While most of those statues are sold out, you can now collect your favorite figures from the Silver Soldiers Series in a new format with the release of distinct designs in the Soldier Bullion Series of silver rounds. Read on to learn more about this exciting new 1 silver round series available at JM Bullion. 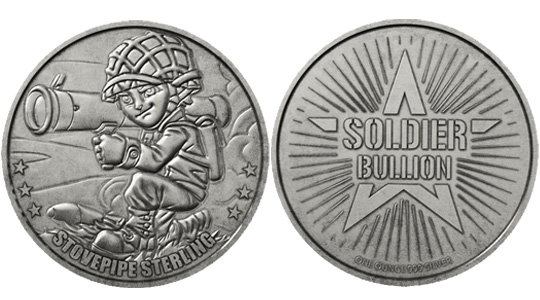 Each 1 oz Soldier Bullion Series Silver Round will have the same reverse design element across the collection. Here, you will find a bold American star at the center with rays of light emerging in all directions from behind the star. The name of the series is boldly emblazoned across the center of the star for dramatic visual effect.

For the reverse side of each round in this series, you will find a new depiction of some of the most coveted characters from the namesake series of statues. First up is the 1 oz Soldier Bullion Series Stovepipe Sterling Silver Round. This brand-new silver round design is similar to the original silver statue but has a somewhat lighthearted take on the design element. Here, a cartoon-like version of Sterling is kneeling down as he looks down the sights of the M1 bazooka. A recoilless anti-tank weapon, you can see the poof of smoke going out the back of Sterling’s M1 as he has just pulled the trigger to fire downrange. Never fear, Sterling is ready to fire another round as there is an unspent projectile resting near his feet that can quickly be loaded and fired at another target.

Stovepipe Sterling was one of the initial releases in the Silver Soldiers Series of statues. As that collection now transitions to silver rounds with distinctive, collectible designs, the characters will come to life in a new way. Each individual member of the squad has a playful name associated with the weapon they wield. In addition to Stovepipe Sterling, that previous series featured the likes of Medic Martinez, “Eyes” on Earl, Harry S. Howitzer, and Arty “Red Leg, the unit Artilleryman.

Background on the “Stovepipe”

The portable, shoulder-fired anti-tank launcher known as the M1 was introduced during World War II, but rooted in the previous conflict of World War I. As mechanization continued throughout the 1920s, 1930s, and 1940s, the growing number of armored vehicles on the field of battle required an answer that could help keep infantrymen safe, or at least help level the playing field for individual infantry units.

The first M1 variants introduced were used by the United States Army during World War II. The round fired from the bazooka, as it was commonly known, used a solid propellant for propulsion. This allowed the weapon to reach further than hand-delivered grenades or mines. It also helped infantry pack a greater punch against mechanized units when high-explosive anti-tank, or HEAT, rounds were used. Bazookas were commonly used against more targets than just tanks, including armored vehicles, machine gun nests, and even fortified bunkers. The term bunker came from the appearance of the weapon. It was similar in look to a musical instrument of the same name used by comedian Bob Burns.

Today, the M1 and its future variants are still in use by the United States Army and the United States Marine Corps. Advancements in technology have altered the size and power of the bazooka, and increased its use as a long-distance weapon against tanks and even as a surface-to-air variant.

Now is your chance to own the first of the Soldier Bullion Series rounds. Bring Stovepipe Sterling home today and feel free to contact us with any questions. Our team is available at 800-276-6508, online using our live chat, and via our email address. Please remember to follow us on Facebook and read our weekly blog posts for an in-depth look at new and upcoming releases in our collection.