Conceived during the latter stages of Queen Victoria’s reign as Queen of England, the Queen’s Virtues is an allegorical presentation of six virtues representing the monarch of England. Today, these virtues are carried into the 21st century by Queen Elizabeth II, England’s longest-reigning monarch. Victory, Truth, Charity, Justice, Courage, and Constancy are set to feature in a stirring new series of gold and silver coins issued by the East India Company and available to collectors in 1 oz weights. Take a moment and dive deeper into the details of this new collection. 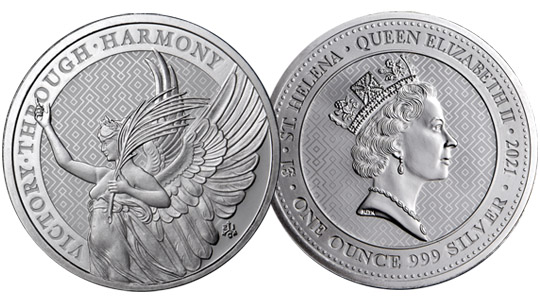 On the reverse side of the first release in the new six-coin series, the 2021 1 oz St. Helena Silver Queen’s Virtues Victory Coin features a depiction of the female allegory of Victory. Based on the Winged Angel of Victory, this image showcases a female figure in left-profile relief with powerful, magnificent wings on her back. She holds a large palm branch in her left hand and lifts her right hand to the sky. The inscription along the rim on this face of the coin read “Victory Through Harmony.” The image of Victory was the first one presented in statue form when it was created just after the death of Queen Victoria in 1901. It is situated on the Victoria Memorial outside of Buckingham Palace, where it stands to this day. Victory is a signal of the end of conflict and represents a celebration of peace. To this day, Queen Elizabeth II as Sovereign of England is the head of the Armed Forces of Britain. She remains the only person with the power to formally declare war and, more importantly, finalize peace.

The obverse face of the 2021 St. Helena Silver Queen’s Virtues Victory Coin depicts Her Majesty, Queen Elizabeth II. This particular design was the third-generation effigy used by the Royal Mint of England from 1985 to 1997. Created by Raphael Maklouf, the design was chided by some when it first debuted for not capturing the true image of Her Majesty at that point in her life. Maklouf defended his design as one that was intended to be timeless and capture the regal appearance and power of Queen Elizabeth II. It depicts the Queen in right-profile relief with the George IV State Diadem Crown.

The coins of the new Queen’s Virtues Series are available with 1 oz of .999 pure silver. Each one is offered in Brilliant Uncirculated condition and can be purchased individually or in bulk. Individual coins come in plastic flips, while multiples are housed inside of either plastic tubes of 20 coins or Master Boxes of 500 coins. The Master Box has 25 tubes of 20 coins each. The coins in this series are issued on behalf of St. Helena, a volcanic tropical island in the South Atlantic that is situated 1,210 miles off the west coast of Africa and is some 2,500 miles to the east of Rio de Janeiro in Brazil. The coins have a face value of 1 Pound, a related but separate currency to the Pound sterling used in the United Kingdom.

Background on the Queen’s Virtues

The new Queen’s Virtues Series of coins will release over the course of three years starting in 2021. There will be two design issues per date mark and the upcoming designs after Victory include the aforementioned allegories of Truth, Charity, Justice, Courage, and Constancy. The history of the Queen’s Virtues dates to a statue sculpted by Sir Thomas Brock. He designed the statue following the death of Queen Victoria in early 1901 and the monument actually includes all of the Queen’s Virtues, with Truth, Charity, Justice, Courage, and Constancy all featured in the broader monument. Brock described his monument design as a devotion to the “qualities which made our Queen so great and so much beloved.”

If you have any questions about these new silver coins, please don’t hesitate to ask. Our customer service team at JM Bullion is available at 800-276-6508, online using our live chat, and via our email address. We encourage you to follow us on social media for daily and weekly updates and read our blog each week for greater insight on new and upcoming releases.