Nearly two centuries ago, the people of what is now the US state of Texas launched a revolution against the centralized control of the Mexican Republic. Over the course of six months from late 1835 to the spring of 1836, American colonists and Tejanos living in Texas clashed with the Mexican Army in an effort to gain independence from the central government of Mexico and President Antonio Lopez de Santa Anna. The 1 oz silver rounds in the Texas Silver Round Series launched a series-within-a-series in 2020 with new reverse designs each year in this four-year release honoring the Texas Revolution. 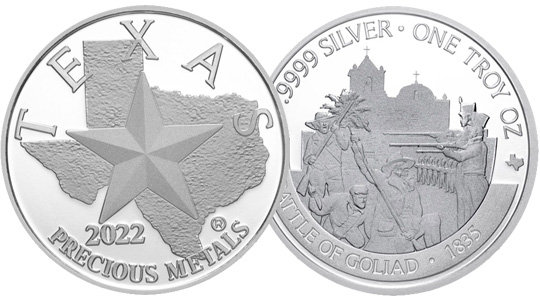 One thing that has remained a constant in the Texas Silver Round Series, is the obverse design of the series. The 2022 1 oz Texas Mint Silver Round features the popular image of the state outline of the Great State of Texas. The design field includes a massive Lone Star imposed over the center of the state outline. The date of issue and the Texas Precious Metals name are engraved on this side around the border of the design field.

For the reverse design of the 2022 Texas Mint Silver Round, you will find a new design as the third and penultimate image in the Texas Revolution Series within the Texas Silver Round program. On this side of the round, you will see the Mexican Army clashing with Texians defending Fort Defiance.

History of the Battle of Goliad

The Battle of Goliad centered on the clash between Texians and the Mexican Army at the Presidio La Bahia, known to Texans as Fort Defiance. However, the battle itself was merely part of the larger Goliad campaign during the war. This campaign was a larger conflict for control of the Texas Gulf Coast. At the outset of the war, Texians expelled Mexican troops from the Gulf Coast, but the Mexican Army later regrouped. During the Goliad Campaign, the Mexican Army sought to retake control of the coast.

At the height of the campaign, Texian forces found themselves outnumbered and low on ammunition. When the Mexican Army finally overwhelmed the Texian defenders, those who surrendered were massacred by the army. The result was outrage within the fledgling Republic of Texas. More Texians, and American colonists, joined the Texian forces. These combined forces would later regroup and definitively defeat the Mexican Army at the Battle of San Jacinto in April 1836 to end the war and establish the independence of the Republic of Texas.

Since 2010, the 1 oz Texas Silver Round Series has been available with .9999 pure silver and designs celebrating Texas history. JM Bullion is here to assist you with questions about these silver rounds at 800-276-6508. Please feel free to follow us on Facebook and read our weekly blog posts for more information on our products