Attention Customers: Due to increased order volume, we are currently experiencing shipping delays of 3-5 business days from cleared payment.

While bullion coin programs such as the Australian Kookaburra and Australian Koala consistently debut new reverse design elements each year, programs such as the American Silver Eagle and American Gold Eagle from the United States Mint have maintained the same design elements on the obverse and reverse since the program’s 1986 debut. For the first time in the history of the program, the US Mint is set to alter one of the design fields on its iconic American Eagle silver and gold coins. After an exhaustive process that was delayed slightly by the COVID-19 pandemic and consisted of 34 designs in all to compare, the US Mint has made a decision for the new reverse on the 35th anniversary of the program. Read on to learn about the individual new designs for these icons of the precious metals industry. 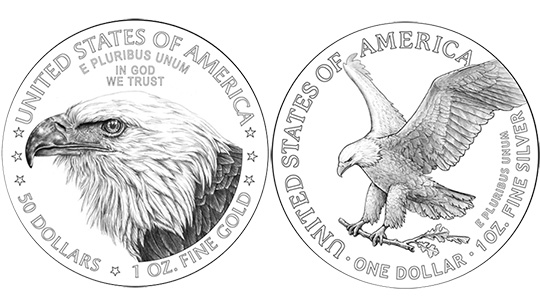 For the new reverse field of 2021 American Silver Eagles, the image focuses on the American bald eagle in flight. The bird is descending into the design field with its wings flexed out behind its figure and its talons clutching an oak branch. The coins continue with the use of the inscriptions of “United States of America,” “One Dollar,” “1 oz. Fine Silver,” and “E Pluribus Unum.”

About the Silver Eagle Designer

The new American Silver Eagle reverse design element comes from famed designer Emily Damstra. Ms. Damstra earned an M.F.A. degree from the University of Michigan in science illustration and has a stunning range of coin designs to her credit for both the Royal Canadian Mint and the United States Mint. Among her most notable coin designs for the Royal Canadian Mint were the final two designs of the Canadian Wildlife Series and all four designs in the Birds of Prey Series. She is also responsible for two recent designs in the America the Beautiful Silver Coin series at the United States Mint. Ms. Damstra created the designs for the 2020 Tallgrass National Preserve and the 2019 Frank Church River of No Return Wilderness coins.

From the debut of the American Gold Eagle in 1986, the reverse design has featured artwork from Miley Busiek. The image on the reverse of all four gold weights in the series featured the design of a family of American bald eagles in their nest. Now, that design will be replaced with a new reverse that continues to showcase the natural beauty and power of the bald eagle. The new design in the series comes from an artist with hands-on experience over the course of several years as a volunteer raptor handler.

In the reverse design of the new American Gold Eagle field is the head of an American bald eagle. The design showcases the steely gaze of the eagle as it is shown in left-profile relief. The details of its feathers are brilliantly captured, as is the powerful hook at the end of its beak. The inscriptions on this face of the coin read “United States of America,” “E Pluribus Unum,” and “In God We Trust” above the design element. Below the design element are inscriptions of “50 Dollars” and “1 oz. Fine Gold.” The fractional-ounce coins each have their own face value and weight inscriptions.

About the Gold Eagle Designer

The new American Gold Eagle design comes from yet another Artistic Infusion Program artist, Jennie Norris. A passionate supporter of wildlife conservation efforts, Ms. Norris worked as a volunteer raptor handler and brought her hands-on experience to bear in creating the new bald eagle image for the reverse of the American Gold Eagle. Though most of her work to date as an artist has been graphic design, illustration, and fine-art designing, she has worked with some of the biggest brands in the world, including Crayola, Sea World, Hasbro, and Hershey.

Rollout of the New Designs

While no exact date has been set for the debut of these new American Silver Eagle and American Gold Eagle designs, investors can expect to see them on the reverse of the two popular bullion coins by mid-2021. The COVID-19 pandemic pushed back the timeline for the debut of the new images, with meetings to select a new design forced to take place virtually and the US Mint struggling to keep up with intense demand for Silver Eagles and Gold Eagles in the early months of the pandemic. What is known about the rollout is the fact that the BU versions of the Silver Eagle and Gold Eagle will be the first coins to feature with the new design. The Proof and Burnished versions of each coin will get the new reverse design later in 2021. Early 2021 coins will continue with the existing designs of the heraldic eagle and the family of bald eagles.

The United States Mint has maintained the same designs on the obverse and reverse of its Silver Eagle and Gold Eagle coins since 1986. The decision to bring new designs to the reverse in 2021 was not chosen at random. The most relevant reason for this is the fact that the 2021 date mark is the 35th anniversary for the series. Another factor in the change of designs is legislation-based. Federal law stipulates the US Mint must wait 25 years before considering the replacement of any given design on American coins, whether circulation pieces or bullion collections.

Watch for the New Designs in mid-2021

JM Bullion will carry the same range of American Silver Eagle and American Gold Eagle coins with the new designs once production and distribution occurs. Be sure to watch for presale listings on these coins by Spring and Summer 2021. Remember to follow us on Facebook and read our weekly blog posts for more detailed information regarding the precious metals industry.