The Emerging Popularity of New Coins in the Perth Mint Catalog

Numismatists eagerly await the annual release of numerous gold and silver coin programs from mints around the world. Among those facilities that collectors and investors keep close tabs on is the Perth Mint of Australia. Numismatists always find a wide variety of precious metals from the refiners at Perth Mint, and while you may be accustomed to the likes of the Australian Kookaburra, Australian Koala, and Australian Kangaroo programs, there are other options emerging as popular annual releases.

Among those Perth Mint coins flying under the radar annually are the Australian Platinum Platypus coin series and the Australian Silver Wedge-Tailed Eagle. Both coins offer the same beautiful design themes as other wildlife-inspired coins from the mint, with the quality and purity you expect from Perth Mint coinage. 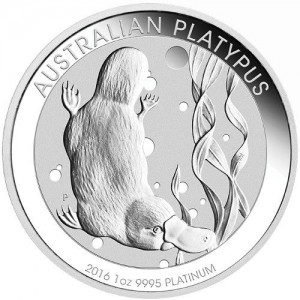 Introduced in 2011, the Australian Platinum Platypus coin series celebrates a unique species native only to eastern Australia. Like the beaver in North America, the platypus was once intensely hunted for the fur of its hide, but in the 20th century the species is protected throughout its range against hunting and poaching. The platypus also happens to be one of the few venomous mammals in the world, with males possessing a spur on their hind foot that delivers a painful (though not deadly) venom.

The Platinum Platypus coin is an annual release from Perth with the following features common to each coin:

On the reverse of the Australian Platinum Platypus is the image of the venomous mammal as it swims in the water. Engravings on this face of the coin are limited to name of the coin issue, as well as its year of issue, weight, purity, and metal content. The obverse of the 2017 1 oz. Australian Platinum Platypus Coin includes the right-profile portrait of Queen Elizabeth II. The current image in use on Australian coinage is the fourth-generation depiction created in 1998 by Ian Rank-Broadley.

The Perth Mint originally struck the Platinum Platypus coins with a state maximum of 30,000 coins in 2011 and 2012, but that has been shifted to an unlimited mintage ceiling, which for Perth means the coins are struck to meet demand until the end of a given calendar year. Sales of the Platinum Platypus through last year’s release break down as follows:

Another coin that is relatively new in the Perth Mint lineup is the Australian Silver Wedge-Tailed Eagle. The coins were introduced in 2015 by the Perth Mint featuring .999 pure silver content and 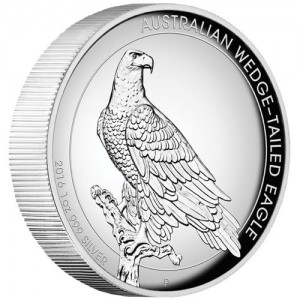 Starting with the new 2017 issue of the coin the Perth Mint improved the purity of the coin, going from .999 pure silver to .9999 pure silver content. The coins have a delicately frosted background that adds additional contrast to help the design features stand out in an eye-catching way.

On the obverse of the Silver Wedge-Tailed Eagle Coin you’ll find the effigy of Queen Elizabeth II from Ian-Rank Broadley. Designed in 1998, this is the fourth-generation portrait of Her Majesty to appear on Australian coinage.

The reverse side of the coin has a beautiful design of the Wedge-Tailed Eagle created by John M. Mercanti, the former Chief Engraver of the United States Mint until 2010. His depiction features the bird of prey as it sits majestically on the end of a tree branch scanning his surroundings for prey.

Founded in 1899, the Perth Mint is now Australia’s oldest operating mint facility. It was originally part of the Royal Mint system and opened following the Sydney Mint and Melbourne Mint. However, following federation in Australia in 1901, the Perth Mint would spend a period of time acting as the official sovereign mint of Australia until the Currency Act of 1964 established the Royal Australian Mint.

Today, the Perth Mint exists in a unique position. As of July 1970, the Perth Mint passed from British possession to the state government of Western Australia. Its silver and gold coins are considered legal tender under that same currency act, however it is the responsibility of the Royal Australian Mint to produce circulation coins for the nation.

The Australian Kookaburra (1990-), Koala (2007-), and Kangaroo (1990-1993, 2016-) are the most popular annual-release bullion coins, but as noted above the mint has other exciting options for numismatist. The Perth Mint refines roughly 400 tonnes of gold annually.

If you have any questions about gold and silver products from JM Bullion, feel free to reach out to us at 800-276-6508. You can also connect with us online through our live chat service and email address, or visit our homepage at any time to find the latest price of gold and silver.