The Wonderful World of Disney: Mickey Through the Ages Coins 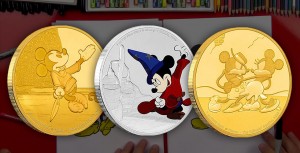 Mickey Mouse is arguably one of the most iconic cartoon characters of the modern world. Introduced to audiences in the 1920s, this lovable mouse and his partner Minnie have gone from silent characters in early motion pictures to the global image of a brand that generates billions of dollars in revenue each year through sales of merchandise, theme park entry tickets, and international resort and cruise line bookings.

The combination of precious metals and Mickey Mouse has resulted in a new series of silver proof coins from the New Zealand Mint. In the beautiful Mickey Through the Ages collection, the coins document the varying roles of Mickey Mouse, as well as his progression in appearance throughout the past nine decades.

Mickey Mouse made his debut in a brief pre-screening of the animated short Plane Crazy in 1928, but he would later become a national phenomenon in the United States in 1928 with the release of Steamboat Willie. That latter animated short was the first ever created that synced the voices and sounds of Mickey Mouse with the actions on the screen, and also introduced the world to his girlfriend, Minnie Mouse.

Each new design release in the Mickey Through the Ages contains a total of four coins. There is a 1 oz silver coin released with each design that features a colorized finish on Mickey, as well as three gold coins: 1 oz, ¼ oz, and ½ Gram. The details for each of the design releases remains the same as far as mintage, metal content, purity, and face value and include the following:

Additionally, all of the Mickey Through the Ages coins feature the same obverse design. On the obverse of each coin in this series is the image of Queen Elizabeth II. Her Majesty’s right-profile portrait was created by Ian Rank-Broadley in 1998, and serves as the official obverse design for the majority of commonwealth coins.

The first release of the Mickey Through the Ages program is the Mickey Mouse The Band Concert Series. This coin depiction is based upon the animated short The Band Concert, which was released in 1935 and featured Mickey Mouse as the leader of a band that struggles to complete a public performance of the William Tell overture through the repeated interruptions of Donald Duck. A member of the concessions crew, Donald is intent on performing with the small music band, but consistently interrupts with his own rendition of “Turkey in the Straw.”

What set The Band Concert apart even from Steamboat Willie was the use of color. This was the first-ever Mickey Mouse film to feature brilliant full color, and was produced in 3-strip Technicolor by Walt Disney Productions and released with United Artists. The film was largely a musical display, with the few speaking lines in the film going to Donald Duck.

On the reverse of each coin is the image of Mickey serving as the conductor of the band, standing on a small soapbox with sheet music strewn about on the floor in front of him and musical notes swirling around.

Walt Disney Productions and RKO Radio Pictures released the animated film Brave Little Tailor in 1938, featuring Mickey Mouse in the titular role of the humble tailor. The film is based upon the fairy tale “The Valiant Little Tailor” from the Grimm Brothers.

In the film, Mickey plays the role of the tailor who takes on the monumental task offered by a king to kill a giant that has been terrorizing his small kingdom. Mickey steps forward inadvertently to become the town’s chosen warrior, bragging that he “killed seven with one blow,” not realizing the peasants were discussing warriors who have killed giants and not the flies he killed in his workshop.

On the reverse of each 2016 Niue Mickey Mouse Brave Little Tailor coins you’ll find the image of Mickey Mouse as he leaves the town and sets out in search of the giant he must kill.

Plane Crazy was released in 1928 as an animated short featuring Mickey and Minnie Mouse. In the film, Mickey attempts to build his own airplane using scrap car parts and farm equipment on a farm with the help of some of his friends. The film marks one of the first appearances of Mikey together with his girlfriend Minnie, who gives him a horseshoe for good luck before his flight.

On the reverse of the 2016 Niue Mickey Mouse Plane Crazy coins is the image of Mickey holding the horseshoe from Minnie Mouse as he sits in the cockpit of his plane. Engravings include the weight, purity and metal content, as well as the copyright symbol of Disney along with the year of release and name of the film.

As hard as it may be to imagine today, Mickey Mouse was actually experiencing a dip in popularity during the late 1930s and into the early 1940s. Walt Disney released Fantasia starting in November 1940 with a storyline originally planned for an animated short as The Sorcerer’s Apprentice. It was written into the storyline of Fantasia as Disney’s third-ever feature film. Each new design features Mickey Mouse from a different iconic role, with this release inspired by his role as the Sorcerer’s Apprentice in the film Fantasia.

On the reverse of the 2017 Mickey Mouse Fantasia Series coins you’ll notice Mickey Mouse in his role as the Sorcerer’s Apprentice in the film. He is depicted giving orders to a mop as it carries two pails of water for him.

Transporting viewers back almost 90 years, the Gallopin’ Gaucho coin focuses on Mickey’s role as an Argentine cowboy in the 1928 animated short The Gallopin’ Gaucho. The Gallopin’ Gaucho debuted in theaters in 1928, and was just the second film ever featuring Mickey Mouse. The film debuted just months after Plane Crazy was released, which also features in the Mickey Through the Ages collection, and a year before the immensely popular Steamboat Willie. The Gallopin’ Gaucho, unlike the latter film, was a silent film.

Co-directed by Ub Iwerks and Walt Disney, The Gallopin’ Gaucho was a playful parody of the Douglas Fairbanks film The Gaucho, which was released to theaters in November of 1927. The film takes place in the Pampas of Argentina, and the storyline of Disney’s The Gallopin’ Gaucho carefully follows that of Fairbanks’ film, with Mickey in the title role.

The reverse of all 2017 Niue Mickey Mouse Gallopin’ Gaucho coin includes the image of Mickey Mouse as the gaucho in the film The Gallopin’ Gaucho. Mickey enters the film riding not upon a horse, but rather on a rhea and when he enters a local watering hole you’ll notice a wanted poster with Mickey’s face on it, implying he’s a bandit or outlaw.

Get Your Mickey Through the Ages Coins from JM Bullion

At JM Bullion, we’re proud to carry the full range of Mickey Through the Ages products, as well as many other New Zealand Mint releases. Check out our full selection of Disney Gold Coins and Disney Silver Coins to learn more. You can browse our extensive online catalog of silver and gold coins at any time, and always stay up to date on the current price of gold and silver as well!