While most of the world was divided politically and ideologically during the Cold War, the city of Berlin, Germany, was physically divided by the opposing sides in the Cold War. 2019 marks the 30th anniversary of the fall of the Berlin Wall, and there are two colorized silver coin sets available that commemorate the occasion. These stunning four-coin sets feature the 2019 American Silver Eagles and 2019 Canadian Silver Maple Leafs. Before you buy, learn more about these Colorized Fall of the Berlin Wall Sets in our blog this week. 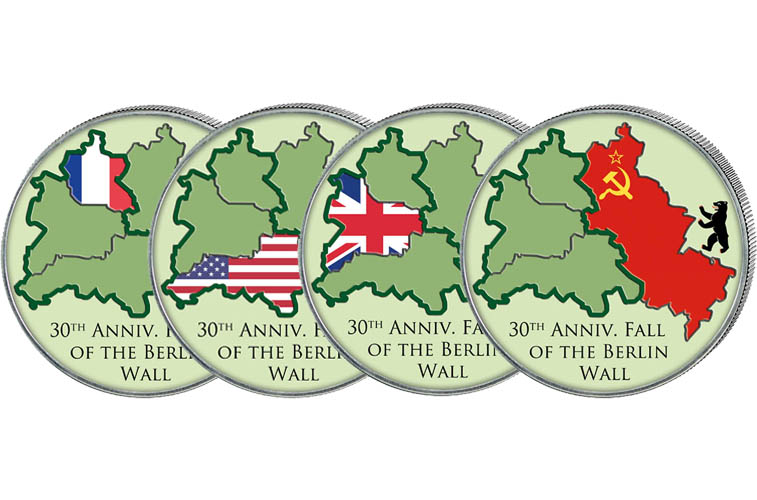 One of the two Berlin Wall Coin Sets available is the 2019 American Silver Eagle Four Seasons Berlin Wall collection. The set includes four 2019 American Silver Eagle Coins with colorized finishes on both the obverse and reverse sides of the coin. The obverse side of the 2019 American Silver Eagles in this set each offer different colorization to match the seasons of the year. Liberty is wrapped in the brilliance of the red-white-and-blue on the obverse of all four coins. The oak and laurel branches in her left hand vary in colorization to match the season, with winter represented by brown colors while spring and summer offer bright, brilliant colors. Likewise, the robe she wears and the brightness of the sun on the horizon have different colors to match the passing seasons.

The reverse of the 2019 American Silver Eagles and obverse of the 2019 Canadian Silver Maple Leaf coins in these four-coin sets have a shared design. You won’t find the heraldic eagle on the American coins or Queen Elizabeth II on the Canadian coins. Instead, each of the coins shares a design mapping out the city of Berlin. Each of the four coins has a map of the city of Berlin surrounded by the Berlin Wall. The individual coins highlight the controlling outside force that established security in Berlin after World War II concluded. The city was divided in half, with the Soviet Union controlling East Berlin. West Berlin was split between France, the United Kingdom, and the United States of America. On this side of each coin, you’ll find one of those nation’s flags representing the area of Berlin it controlled.

Packaging, Mintage, and a Special Privy

When you buy either of these colorized coin sets, you’ll receive all four coins housed within a protective display box. The coins themselves are housed in what is known as an acrylic turning capsule. This allows you to view the designs on both sides of any of the four coins with ease, while still protecting the beautiful colorization. Each of the individual coins is in Brilliant Uncirculated condition and the set comes with a Certificate of Authenticity. Further, each set is limited in availability to just 2,000 sets.

If you look at the obverse of the 2019 American Silver Eagle Coins and the reverse of the 2019 Canadian Silver Maple Leaf Coins, you’ll notice a special privy mark. That privy mark is at Liberty’s back on the American coins and to the lower-left of the sugar maple leaf on the Canadian coins. It features a crack running down a section of the Berlin Wall with the number “30” in the center, marking the 30th anniversary of the fall of the wall.

History of the Berlin Wall

The fall of the Berlin Wall in 1989 marked the beginning of the end of the Cold War. The Soviet Union’s power was waning and its economy sinking. The wall that had divided a city physically and a world ideologically was now crumbling. When first constructed, the Berlin Wall was meant to separate only East Berlin from West Berlin and largely served to prevent East Berliners from defecting to West Berlin. Throughout the 1960s, the wall was extended to actually surround West Berlin and cut it off from its Western supporters. Berlin’s location within what was then East Germany made it necessary in the eyes of the Soviets to construct a wall around it.

Both the 2019 American Silver Eagle and 2019 Canadian Silver Maple Leaf Four Seasons Berlin Wall Coin Sets are now available to purchase online from JM Bullion. Please feel free to reach out to us with questions at 800-276-6508 with questions, or connect with us online through our live chat and email address. As always, follow us on Facebook for fun daily updates and opportunities to participate in contests. Check back with our blog each Friday for updates on new products and upcoming releases.