The Intaglio Mint is more than a small, boutique private mint. Each of the silver rounds refined by the Intaglio Mint is the result of dedication to craftsmanship, passion for silver, and a keen eye for intriguing designs. As the perfect example of this craftsmanship and one-of-a-kind design work, the silver rounds in the Molon Labe Series standout as an exceptional collection. What started with the 1 oz Molon Labe Round with Type I design has grown to include two different weights and three representative designs in the series. Now you can learn more about the designs in this beautiful collection! 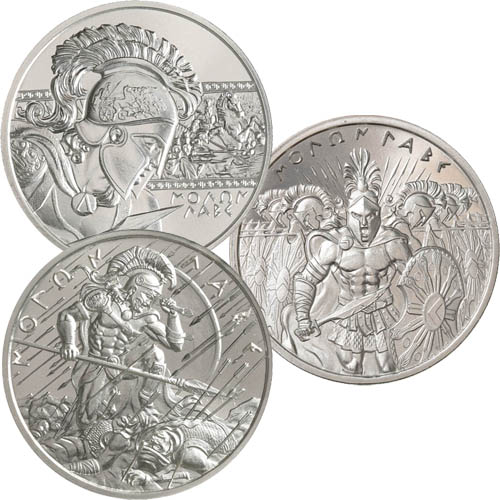 Running Down the Three Designs

The Molon Labe Series of silver rounds includes three different designs identified as Type I, Type II, and Type III. While each design type offers a view of Spartan warriors, the specific imagery of each issue is slightly different. However, each design still reflects the characteristic defiance of the soldiers in the Spartan Army. Below are the details of the three design types:

All three versions of the design in the Molon Labe Series share the same reverse design. While the Type I, II, and III designs appear on the round’s obverse, the Intaglio Mint logo appears on the reverse. This side of the round includes the mint logo, a letter “I” that resembles a Roman column. Around it is the name of the mint in full, with a sunburst radial field in the background. The edge border includes a stippled background finish with inscriptions of “One Troy Ounce” and “.999 Fine Silver.”

All of the Molon Labe Silver Rounds are available with .999 pure silver content. Each of the three design types is available as a 1 oz silver round and a 2 oz silver round. There is no announced mintage limit to any particular design in the series. Packaging of the rounds includes the following options by weight:

Origins of the Phrase Molon Labe

The phrase “molon labe” comes from the Ancient Greek and translates literally as “having come, take.” Modern English translations of the classical expression of defiance offer a slight twist as “come and take (them).” The words are commonly attributed to the Spartan leader King Leonidas. Leonidas was the ruler of the city-state of Sparta in Ancient Greece. Though not the largest or more economically powerful city-state in Ancient Greece, Sparta was feared for its military skill and strength.

As the Persian Empire looked to swallow up Greece in its advance forward from Persia, King Leonidas led a force of some 2,000 men in total to the “Hot Gates” at Thermopylae to delay the Persians. Leonidas knew he could not win, but he was willing to put himself and his 300 elite Spartan warriors in the way of the Persian advance to buy time for the rest of Greece to assemble its forces. When approached by the Persian ruler Xerxes I and offered a chance to live if he would surrender, Leonidas is said to have uttered the phrase “molon labe” to Xerxes. The insinuation being he would never surrender, and that if Xerxes wanted his men’s weapons he was free to come and try to take them.

The designs in this series reflect that defiant nature of the Spartan Army on that day. Knowing they could not win, his men stood and fought to the death regardless. The Type III design is particularly reflective of the battle and that sense of defiance. When the Persians threatened to block out the sun with a volley of thousands of arrows, one of Leonidas’ soldiers worried about the volley he is said to have responded “won’t it be nice, then, if we shall have shade in which to fight them.” Even with thousands of arrows headed their way, the Spartans bore down and prepared to fight.

The Type I, Type II, and Type III Molon Labe silver round designs are now available to you from JM Bullion. Please feel free to contact us with questions at 800-276-6508, chat with us live online, or email us directly. You can also follow us on Facebook for daily updates and information or visit our blog each Friday for new posts.