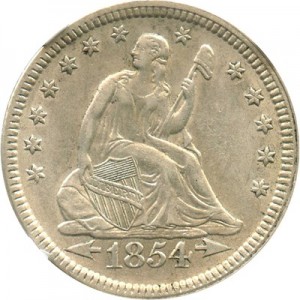 The Seated Liberty Dollar was the second Silver Dollar produced by the US Mint, and unlike its predecessor it remained in production for more than a decade. In fact, the Seated Liberty stayed on the production lines of the US mint for more than 30 years. Because of this extended period of time being minted, this particular coin is relatively easily found. For collectors, however, simply finding the coin is not enough, because everyone desires a piece that has been well-preserved over the course of it being circulated. Having more than 100 years under their collective belts, Seated Liberty Silver Dollars are found in poor condition more often than not.

Even if they aren’t found in poor condition, you will almost always be able to notice at least some signs of wear and tear because these coins were so readily exchanged.

What You Will Pay for a Seated Liberty Silver Dollar

The price you are going to be asked to pay for a Seated Liberty Silver Dollar varies dramatically depending on a few different factors. For one, the condition of the coin means absolutely everything. Even though every single one of these Silver Dollars is over 100 years old, collectors still very much care about the condition the coin is in. When it comes to well-preserved Seated Liberty Dollars you can expect to pay anywhere from a few hundred dollars to as much as $2,000. The drastic price variance has to do with the rarity of the coin in question. Naturally, an excellently preserved Seated Liberty from 1842 will sell for a much higher price than a similarly preserved coin from 25 years later.

If you are simply looking to acquire one of these coins and do not necessarily care all that much about the condition, you can still expect to pay no less than $100. Even the earliest Seated Liberty Dollars will range from $100-$200 if their condition is questionable. As is the case with Bust Silver Dollars, it is not often that you find beginner or amateur collectors looking to get their hands on coins that are as generally pricy as Seated Liberty Silver Dollar.

The Most Sought After Seated Liberty Silver Dollars

Apart from the age of the coin, collectors will place more value on coins that have been preserved in excellent condition. It is all too common for a coin that is more than a century old to be overly damaged, so finding one of these coins in excellent condition is nothing short of amazing.

Though it is impossible to say exactly how much a given Seated Liberty will cost 10 or 20 years from now, it can be said with some level of certainty that the asking price for one of these coins will be greater than it is now. The fact that these coins are no longer being produced in conjunction with the fact that fewer will exist with each passing year means that the value of these coins will only ever rise.

For this reason, we have to make it known that now is the absolute best time for you to get your hands on a Seated Liberty Silver Dollar.