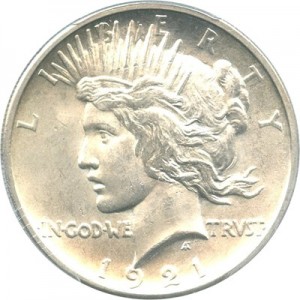 The United States Mint is well-recognized all over the world and has been producing coins for both the United States as well as other countries since shortly after the U.S. was founded. While the U.S. Mint got its start in Philadelphia, Pennsylvania, it began to expand quickly and therefore needed additional facilities in order to continue its operations. Coins produced by the mint carry what is known as a mintmark, a piece of identification on the coin that shows where the coin was minted.

The United Sates Mint has produced many types of coins throughout its significant history. One of the most famous coins, and the last U.S. dollar coin to be struck for circulation in silver, is the Peace dollar.

Of all the dollar coins ever produced by the mint, the Peace dollar is one of the most recognized and coveted. This coin’s silver content, limited mintage and history make it sought after by collectors and coin enthusiasts alike. The following sections will discuss the peace dollar in depth, and discuss why they are so popular to this day.

The Peace dollar’s history can be traced back to the early twentieth century. The Pittman Act played a key role in the minting of the silver peace dollar by the U.S. Mint. Following passage of the act, the U.S. Mint was required to strike millions of silver dollar coins. The mint chose the Morgan Dollar design, and began striking silver dollars using the design in 1921.

Eventually, a lobby formed asking the U.S. Mint to strike a coin that was symbolic of the peace reached after the end of World War I. Though this lobby was unsuccessful in getting Congress to act on coin re-design through legislation, it did succeed in getting its message heard by the right people. In December 1921, then Treasury Secretary Andrew Mellon approved the design of the Peace dollar. Peace dollars were minted in the years 1921-1928 and again from 1934-1935.

The design of the Peace dollar is the work of Anthony de Francisci. The Peace dollar design was the result of a competition to design a coin that was symbolic of peace after the First World War. The originally announced design featured a broken sword which the public quickly voiced their concerns about as they saw it as symbolic of defeat. The broken sword was quickly removed from the coin’s design.

The Peace dollar’s obverse depicts the head and neck of the Goddess Liberty. She is in the profile position with flowing hair and a radiant crown on her head. Just 34 years of age at the time of the coin’s design, de Francisci was the youngest competitor of the possible designers. It is said that he modeled the features of Lady Liberty after his wife Teresa de Francisci. In addition to the profile of the Goddess Liberty, the coin’s obverse also features the phrase “In God We Trust” and says “LIBERTY” across the top edge. The mint year is also inscribed.

The reverse features the iconic bald eagle at rest clutching an olive branch. The bald eagle is sitting on a perch with rays of sunlight in the background. The word “PEACE” is inscribed along the bottom edge of the reverse. The top edge of the reverse features the inscription “UNITED STATES OF AMERICA,” “E. PLURIBUS UNUM” and the phrase “ONE DOLLAR.” Anthony de Francisci actually submitted two different designs for the coin’s reverse. The key difference between the two designs was the iconic eagle. One eagle was breaking a sword while the other was holding the olive branch. The more peaceful looking olive branch design was chosen.

For collectors, the Peace dollar is popular not only because of its limited mintage but also due to its historical significance and simple beauty. Because this coin was emblematic of peace following World War I, collectors view it as a true piece of American history. The Peace dollar is also significant among collectors because it was the last dollar coin containing silver that was struck for circulation purposes.

Another reason that the Peace dollar is popular with coin collectors is the coin’s age. The earliest edition of this coin is approaching 100 years old and many of them remain in fine condition. It is not surprising that so many collectors would attempt to buy and hold these coins given their rich cultural history, design and silver content.

As with many other limited edition types of coinage, the popularity of Peace dollars may also depend on the release year. In addition, some coins were struck with a high relief, and although those coins were believed to have been melted down, one has surfaced. It is said that the 1921 Peace dollar is the closest to de Francisci’s original design, and while this coin may not be considered rare it does become much harder to obtain in upper mint-state grades. Most numismatists would agree that the 1928 edition is the scarcest, with only 360,649 minted for circulation.