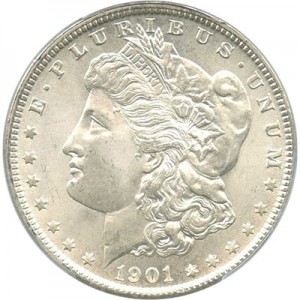 Morgan Silver Dollars were an immediate hit with Americans when they were first introduced in the late 1800s, but that popularity extended into the following century. For this reason, you will find that collectors are especially interested in those Morgans that were minted shortly after the turn of the 20th century. Though these coins are popular, fewer and fewer of them exist every year thanks to them being bought up with such regularity.

Now is the perfect time to act if you want to get your hands on a Morgan Silver Dollar, because as time moves forward fewer and fewer of them will remain available for purchase.

For coins that are more than a century old, like the Morgan Silver Dollar, the condition of the piece is something that is constantly going to be called into question by collectors. Prior to making any purchase, a prospective buyer is going to carefully analyze every surface of the coin looking for even the smallest imperfections.

For most people, the best option is to have Morgans sent away to a professional company in order to be graded. Taking into consideration the fact that this is not an option for everyone, we have provided an outline of the basic coin grades below.

Uncirculated: A coin that is determined to be in Uncirculated condition is one that has spent absolutely no time exchanging hands. These coins will have had their imagery and inscriptions entirely intact and they will take on the look of a brand new coin. For collectors, these are the best coins available.

Extremely Fine: If a coin is determined to be in Extremely Fine condition, the coin is one that was circulated for only a short period of time. Despite not being circulated all that much, these pieces will show some minor signs of damage that can range from scratching to the wearing down of the coin’s surfaces. Collectors also love these coins because they are affordable but also in decent condition.

Fine: If a coin is determined to be of Fine grade, this means that it was circulated for a good bit of time. Despite this, these pieces will not show all that much damage and will appear to have been generally well-preserved. These coins are great for collectors who are looking to put together a complete collection.

Good: Good is the worst grade a coin can receive and is indicative of a piece that has seen its better days. These coins spent a good bit of time in circulation and will show exactly that. From scratching, to chipping, and even the bending of the coin itself, the damage present on these coins is something that cannot be ignored or overlooked.

If you are attempting to determine an accurate price point for a Morgan Silver Dollar, there are a few things you must pay attention to. First, condition is important because no collector wants to add a poorly preserved coin to their collection. For this reason, well-preserved coins will always sell for higher prices than those that have been extensively damaged. Secondly, because multiple types of Morgans were minted every year, the exact type you own will also play into the asking price. Below exists a chart aimed at giving you a better idea of what you might be asked to pay for a Morgan given its condition and type.