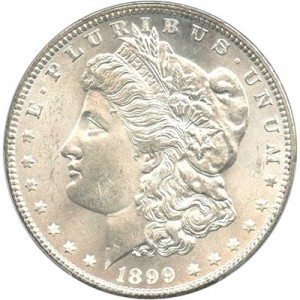 The Morgan Silver Dollar is just one of many single-dollar coins produced by the US Mint, but is one of the more popular versions. Though this particular coin is no longer being produced, collectors the world over are scrambling to get their hands on it. With each passing year, however, the number of Morgan available on the market is constantly being diminished, and after some time none will exist at all.

Knowing this, collectors are doing everything in their power to acquire these coins before they are more difficult to acquire.

The Morgan Silver Dollar, like most coins that have been circulated for extensive periods of time, are the subject of a lot of scrutiny at the hands of collectors. This is so because these coins have been exchanged so much that a large amount of damage had the opportunity to occur on the faces of the coin. You will notice that collectors carefully pick apart these coins before purchasing in an effort to determine if a piece is worth purchasing or not.

For most people, the best option is to have the coin sent away for grading at the hands of a professional grading company. Knowing that this isn’t always an option, we have provided below an outline of the most popular coin grades as well as their characteristics below.

Uncirculated: A coin that is determined to be of Uncirculated grade is one that has spent almost no time in circulation. These coins will take on the appearance of a brand new coin and will show not even small signs of wear. For collectors, it goes without saying that Uncirculated Morgan Silver Dollars are the most preferred.

Extremely Fine: If a coin is determined to be of Extremely Fine grade, this means that the piece in question will have been circulated, but only for a short period of time. From its time in circulation, a coin of this grade will most often show only minor signs of wear, like light scratching and some wearing down of the surfaces.

Fine: If a coin is determined to be of Fine grade, it means that the coin was circulated for an extensive period of time, but did not incur much in the way of physical damage. These coins will show some consistent surface wear and consistent scratching, but the imagery and inscriptions on the faces will still be almost entirely intact.

Good: Good is the worst grade a coin can receive and is often indicative of a piece that has spent a large majority of its existence in circulation. The damage you will find on these coins, however, can range from something as small as a slight bend, to as large as a big chip out of the coin’s face. Though the damage will always be heavy, the extent of the damage can range dramatically.

For coins like the 1899 Morgan Silver Dollar, determining a price is something that is not all that difficult to do. By simply paying attention to the condition of the coin, you will have fought half the battle already. After that, you must simply take note of the type of Morgan you have because there were multiple different types of these coins minted every year. Below is a chart aimed at giving you a better idea of what you might be asked to pay for a Morgan given its condition and type.