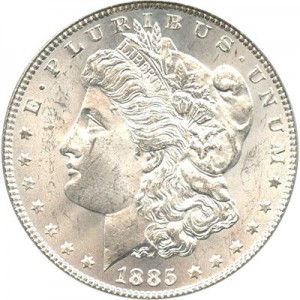 Silver Dollars are no longer an integral aspect of American currency, but for many years they were. These coins were first introduced back in the late 1700s and were almost immediately a hit amongst people who did business in larger dollar amounts. Keep in mind, that back in the 18th and 19th centuries, a single Dollar was a lot of money. Morgan Silver Dollars were not introduced until the 19th century, but they were an instant success.

Though these coins have since been taken off the production lines, they remain extremely popular amongst collectors from both the US and abroad.

For coins that are more than 100 years old like the 1885 Morgan Silver Dollar, the condition the coin is in is something that is always called into question. The reason for this is due to the fact that, during their time in circulation, these coins were subjected to innumerable sources of wear and tear. For collectors, this is why it is important to assess the condition of a coin before ever committing to a purchase.

Normally, a person who is looking to find out an official grade for their coin will refer to a professional company who executed coin grading. Understanding that not everyone has the extra money sitting aside to send coins away for grading, we have provided below an outline of the different popular coin grades.

Uncirculated: Uncirculated coins are those that spent a very short period of time, or no time at all, being exchanged. These coins will have retained all of their original texture, and the coins raised design will appear as though it was just minted. For collectors, these coins are the most desirable but also on the pricier side of things.

Extremely Fine: A coin that is graded as being Extremely Fine is one that spent a very short period of time in circulation. These coins will appear to be in absolutely perfect shape, but under close inspection you will notice that there is some light scratching on the coin’s surfaces.

Fine: If the Morgan Silver Dollar in question is determined to be Fine, this means that it spent a good amount of time being circulated. Though they spent a lot of time changing hands, these coins were somehow able to avoid becoming overly damaged or worn. However, you will notice light scratching more often than not.

Good: If a coin’s grade is Good, this means that the coin in question spent a very long time being exchanged. These pieces will feel smooth to the touch because the raised imagery and inscriptions will have been worn down due to the changing of hands. Though in poor shape, these coins are still desirable to the right collector.

If you are attempting to determine a price for a coin that is more than 100 years old, you must look no further than the condition the coin is in and type of coin. The US Mint produced different types of Morgan Silver Dollar every year, so knowing the type of coin you own will help you when it comes to determining a price. Secondly, the condition the coin is in will play into the asking price. Below is a chart aimed at giving you a better idea of what you will be asked to pay for a Morgan Silver Dollar given the coin’s condition and type.