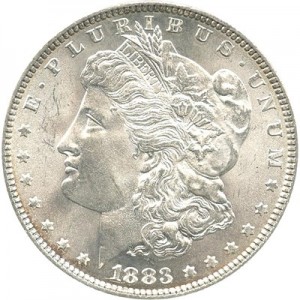 The Silver Dollar had been a mainstay of American currency since it was first introduced during the late 1700s. Unfortunately, apart from the coin’s overall utility, these pieces were generally regarded as being bland and free from an evocative imagery. Upon the release of the Morgan Silver Dollar towards the end of the 19th century, however, that all changed.

This new Dollar coin was not only beautiful in its design, the texture of the coin was unlike anything seen on Silver Dollar’s of the past. Today, though these coins are no longer being produced, they are extremely popular amongst collectors from all over the world.

For coin that are as old as the 1883 Morgan Silver Dollar, the condition that the coin is in is never guaranteed. You see, because these pieces were often circulated for decades at a time, some may be in incredibly poor condition, while others may be well-preserved. It is the goal of every collector to determine whether a coin is worth adding to a collection or not, and they will do this by assessing the condition.

Normally, a coin-grading company is the best way by which you can certify the condition of a coin. Understanding that not everyone has the time and money to send a coin away for grading, we have provided below an outline of the popular coin grades as well as their characteristics.

Uncirculated: A coin graded as being Uncirculated is one that spent no time at all on the open exchange market. Instead, these coins were immediately placed into safekeeping shortly after being minted; this is why the coin appears as though it is in perfect shape. Though generally attractive, these coins are almost always some of the most expensive.

Extremely Fine: A coin graded as being Extremely Fine is one that spent only a short period of time being exchanged. These coins will appear to be pristine, but under close inspection you will be able to make out minor signs of wear. In general, these pieces are still considered to be great additions to any collection.

Fine: If a coin is graded as being Fine, you can bet that it was circulated for a good amount of time. The things about these Silver Dollars, however, is that even despite their somewhat elongated time in circulation, they are still ok shape and have managed to mostly avoid the common signs of wear associated with heavily circulated coins.

Good: Good is the worst grade a coin can receive and is usually used for coins that have been very heavily circulated and damaged. The surfaces of these pieces will be smooth to the touch and the imagery and inscriptions may be worn away to a good extent.

Determining a price for the Morgan Silver Dollar is no major feat so long as you take a few different factors into consideration. For one, there were multiple types of Morgan Dollars minted every year and the specific type of coin you possess will play into the asking price. Secondly, collectors care so much about the condition of the coin that this also plays into the asking price. Below is a chart aimed at giving you a better idea of what to expect to pay for an 1883 Morgan Silver Dollar given its condition and type.