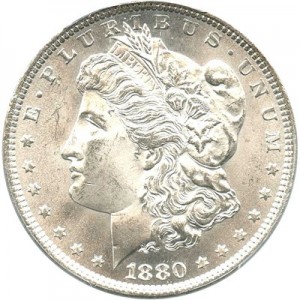 The Silver Dollar is a coin that was first introduced back in the late 18th century, but continued to play a role in US coinage for the next century and beyond. Up until the late 19th century, the Silver Dollars were generally plain-looking and free from evocative imagery. When the Morgan Silver Dollar was released, however, that all changed as the imagery present on the coin was unbelievably beautiful.

For collectors, these coins are important because they are major parts of American history. Unfortunately, because of how long ago they were minted, these coins are quite difficult to find in great condition—something that collectors are not very fond of.

For coins that were produced in the 1800s, the condition of said coin can never be guaranteed. The reason for this is due to the fact that, in their 100+ years on the open market, these coins very well might have been heavily damaged. Other coins, however, have survived the years and are still in great shape. Differentiating between the two is the job of collectors, and is one that only grows more difficult with each passing year.

Listed below are the different popular coin grades as well as their characteristics. This exists in order to give you a better idea of what coins of a certain grade might look like.

Uncirculated: A coin that is graded as being Uncirculated is one that spent no time at all on the open exchange market. These coins will appear to be pristine and free from damage, and this is most often quite true. For collectors, Uncirculated coins are the most preferred, but are also the most expensive.

Extremely Fine: Extremely Fine is a grade given to coins that have been circulated, but not for a very long period of time. These coins will appear to be pristine, but under closer inspection you will be able to see that they have been damaged to some extent. All in all, these coins are a great addition to any collection because they are attractive, in good shape, and affordable compared to coins of a higher grade.

Fine: Fine is the grade given to coins that have been in circulation for a long period of time, but have not been so heavily damaged during that time. You will notice that these coins have a lot of light scratching on either side, and the texture of the coin will have been worn down a bit thanks to the changing of hands over the years.

Good: Good is a low grade and is given to those coins that have been extremely heavily circulated and damaged. These coins will play host to a lot of heavy scratching, not to mention plenty of other signs of damage. All in all, these coins are inexpensive, but they are also not so pleasing to the eye.

When it comes to coins that are more than one hundred years old, determining a price is something that is not as difficult as you might think it is. For one, because there were multiple types of these coins minted every year, the exact type you own will help determine the price. Secondly, because condition means everything to collectors, the better preserved the coin is, the higher the asking price will be. Below is a chart aimed at giving you a better idea of what you can expect to pay for a Morgan Silver Dollar given its condition and type.