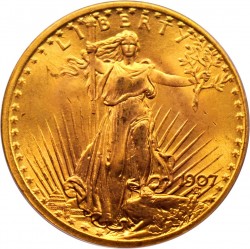 The Saint-Gaudens $20 Double Eagle is one of the most sought after gold coins on the market today. These gold pieces were produced by the U.S. Mint from 1907 to 1933. The coin is named after its designer, Augustus Saint-Gaudens, and is widely regarded as one of the most beautiful U.S. coins ever minted.

The Saint-Gaudens $20 gold coin was the result of President Theodore Roosevelt’s desire to beautify U.S. coinage. President Roosevelt felt that Saint-Gaudens was the man who could help him do so.

Saint-Gaudens eventually passed away before the designs were finalized to go into production. The coin’s high relief is said to have made the coin difficult to strike, and U.S. Mint chief engraver Charles Barber made some modifications to the design that allowed it to be struck with a single blow.

The value of a Saint-Gaudens $20 Coin can vary significantly based on the coin’s mint year and overall condition. For example, a 1907 Saint-Gaudens in good condition may sell for around $1139 or close to the current price of gold. A 1908-S, on the other hand, may sell for over $8600 if in uncirculated condition. If you have a Saint-Gaudens gold coin that appears to be in great shape, you may want to send it in to a professional coin grading service such as PCGS or NGC.

By going through the trouble of having your coin graded by a professional, you may get a much better idea as to the coin’s real condition and fair market value. The grading process is quite intense and accounts for even the smallest imperfections in a coin. Grading provides peace of mind, however, as not only is the coin’s condition considered but the coin’s authenticity and metal content are also verified.

You can examine your $20 Saint-Gaudens gold coin yourself to get an idea of how your coin might potentially be graded. For starters, simply pick a point of reference. For example, you may decide to initially focus on the torch held by Lady Liberty. If the torch feels worn down and looks significantly eroded, the coin is likely only in good condition. If the torch has just minor wear and tear, the coin may be in fine condition. If the torch remains crisp, clear and robust with no damage or discoloration, then the coin may potentially be in extremely fine condition. Of course, you will have to closely examine every detail on your coin for signs of wear and tear. In addition, the coin’s overall color and hue should also be considered.

On the reverse of the coin, the mintmark is just below the date. “D” is for the Denver Mint. “S” is for the San Francisco Mint. The other facility to produce these coins, Philadelphia, did not use a mintmark. The editions with mintmarks may potentially have higher values and you will definitely want to know which location minted your coin.

The value of the Saint-Gaudens $20 Coin is derived from the coin’s gold content as well as collector demand. Because this coin contains nearly one troy ounce of gold, its value can be significantly affected by changes in the price of gold. In addition, this coin is considered to be one of the most visually appealing ever produced by the U.S. Mint. The beautiful design along with the coin’s gold content and increasing age may potentially keep premiums on the rise.