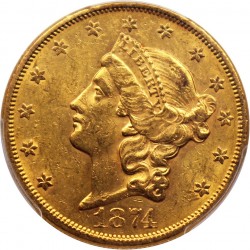 The 1874 Liberty Head $20 Gold Coin produced more than 1.6 million coins with a good amount still in existence today. Many of the 1874 output came from the San Francisco mint, with smaller numbers of $20 gold coins being struck at the Philadelphia and Carson City minting facilities. Gold coins were mainly used in the West, though they did see some circulation in the cities along the eastern seaboard. Keep in mind, however, that $20 was a lot of money in the 1870s, so Liberty Head Gold Coins were mainly used during large transactions, most often banking related.

When it comes to collecting these coins, regardless of its type, a collector will always look at the condition the coin is in. Seeing as only the most beautiful pieces are added to most people’s collections, it follows that collectors are willing to pay a hefty price to get their hands on a 1874 Liberty Head $20 Gold Coin in excellent shape.

The Liberty Head $20 Gold Coin is one of the most iconic pieces of US coinage. When it comes to any collectible coin, the most important aspect of the coin is the condition which it is in. The condition is always carefully analyzed by collectors because it is the well-preserved coins that sell for the highest prices.

Normally, you would send a coin away for grading by a professional company, but not everyone has the time and money to send their coins away. Because of this, we have provided below an outline of the characteristics that best describe coins of a certain grade.

Uncirculated: A Liberty Head $20 Gold Coin that is graded as being Uncirculated is one that never spent any time in circulation. These coins have been well-preserved over the years and appear to be in mostly pristine condition. Naturally, these are the coins that will bring in the most attention from collectors.

Extremely Fine: A coin that is graded as being Extremely Fine will closely resemble an Uncirculated coin, but under close inspection will show some signs of wear and tear. This wear will most likely be in the form of light scratching, but other than that the surfaces of these coins will be wholly intact.

Fine: This is the grade given to those Coins that have been circulated fairly heavily, but have not incurred any type of major damage. The imagery and inscriptions on these coins will be able to be seen with the naked eye with ease, but the overall texture of the coin may have been worn down a bit.

Good: Coins graded to be Good are those that have been circulated more than any other. As a result, these coins have incurred a lot of damage, most of which is heavy in nature and able to clearly be seen with the naked eye. Despite its poor condition, Good 1874 Liberty Head $20 Gold Coin are still a prize to a good amount of collectors.

When it comes to trying to price a Liberty Head $20 Gold Coin, there are a few things that you have to take into consideration. For one, the coin’s condition means everything. Because collectors are only wanting to add those well-preserved coins to their collections, the condition of the coin will be the first determinant of price. In fact, apart from condition there are not many other factors. The chart below will give you a better idea of what you might be asked to pay for a Liberty Head $20 Gold Coin given its condition and grade.