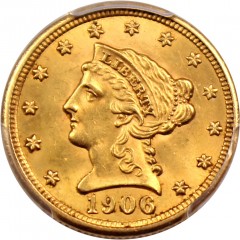 The 1906 Liberty Head $2.50 Gold Coins are numismatic treasures that remain popular today among series enthusiasts and type collectors. Although over 176,000 coins were produced by the U.S. Mint, far fewer of these coins survive today, which is the situation with most pre-1933 U.S. gold coin issues, which were melted by the millions after the nation left the gold standard.

Christian Gobrecht designed the Liberty Head $2.50 Gold Coin which featured a large head of Liberty facing left, wearing a wide coronet inscribed with the word LIBERTY. Her hair is pulled back in a bun and held in place by a string of pearls. Thirteen stars are placed around the periphery, representing the original colonies, with the date below. The eagle on the reverse was essentially the same one that had been on quarter eagles since 1808.

In order to come up with a value for a given 1906 Liberty Head $2.50 Gold Coin, you must look no further than the condition the coin is in. Because most of the surviving issues were circulated for years and years on end, the condition of these coins varies dramatically.

In order to come up with an appropriate valuation for an Liberty Head $2.50 Gold Coin, you must first determine what grade the coin in question is. Typically, grading a coin requires sending it away to a professional company, but by way of the specifications below, you can give your coin(s) a rough grade based on the condition.

Uncirculated: An Uncirculated Liberty Head $2.50 Gold Coin is one that never made it into circulation and was put into safekeeping almost immediately after being minted. Coins deserving of this grade will show no imperfections and will have all relevant imagery and texture intact. Of course, due to the length of time these coins have existed, some of their luster may have faded with the years.

Extremely Fine: An Extremely Fine Liberty Head $2.50 Gold Coin is one that shows almost no signs of wear at all. Though these coins were circulated, the imagery has barely been altered and the raised aspects of the coins are still exactly that—raised. The coin will appear significantly less shiny than its Uncirculated counterpart, but will still have some decent luster.

Fine: A Fine coin shows a good amount of wear from being exchanged hundreds of thousands of times throughout the years. You will be able to see a good amount of scratching and some of the raised imagery will have been worn down. The coin’s shine is almost nonexistent as it was lost due to the wear of constantly being exchanged.

Good: Coins in this condition are found more often than coins in any other condition. These pieces have seen many years of exchange and show it. The raised imagery will have been worn down completely to the point where the images themselves are difficult to make out with the naked eye. Despite their poor condition, these coins are a prize for most every collector.

As mentioned above, the 1906 Liberty Head $2.50 Gold Coin, regardless of condition, is not the priciest edition of the coin. Of course, it goes without saying that you will pay significantly more for a coin that is in superb condition. The chart below is aimed at giving you a more concise idea of what you might be asked to pay for an Liberty Head $2.50 Gold Coin Penny produced in 1906.