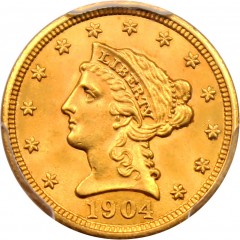 The 1904 Liberty Head $2.50 Gold Coins are popular among numismatists and bullion collectors and enjoy widespread market appeal today. While the United States Mint struck 160,790 pieces, a large number in relation to the much smaller outputs of the 1880s and 1890s, only a small fraction of these coins survive today. This is the case with the majority of pre-1933 U.S. gold coin issues, which were melted in large numbers after the nation abandoned the gold standard in 1933.

The Liberty Head $2.50 Gold Coins were designed by engraver Christian Gobrecht, who had served as the U.S. Mint’s chief engraver during the first half of the 1840s. Liberty Head $2.50 Gold Coins were made with a standard “coin gold” composition of 90 percent gold and 10 percent copper and weigh 4.18 grams, boasting a total gold content of 0.1202 ounces. These classic gold coins also measure 18 millimeters in diameter, which means they are slightly wider than a modern U.S. dime. Though small as compared to larger-denomination gold coinage, they are often a bullion investor favorite, especially among those who enjoy pre-1933 U.S. gold coins.

Like most old coins, collectors look at the Liberty Head $2.50 Gold Coin through the lens of how well it has been preserved. These coins were used on a daily basis during their time in production, and though they are old many of them have been well-preserved.

Under normal circumstances, coins this old are sent away for grading at the hand of a professional organization. Understanding that not everyone has the time and money to send coins away for grading, we have provided below a specification outline of what you can expect coins of a certain grade to look like.

Uncirculated: This is the grade given to those few coins that never spent any time in circulation. These coins were almost immediately put into safekeeping after they were minted, and because of that have managed to remain in tip-top shape. Naturally, these are some of the most sought after Liberty Head $2.50 Gold Coins.

Extremely Fine: If your coin is graded as being Extremely Fine, it is a piece that spent but only a short amount of time being circulated. These coins will show some extremely light amounts of wear and tear on their surfaces, but for the most part will appear to be in perfect shape. Only under close inspection are you able to make out this coin’s deficiencies.

Fine: If a coin is graded to be Fine, this means that it only incurred a light amount of damage during its time in circulation. These coins will show signs of wear and tear on both faces, but this damage will not be so severe that the coin’s imagery and texture will have been compromised. When it comes down to it, these Liberty Head $2.50 Gold Coin are also relatively well-preserved.

Good: A coin that receives the grade of Good is one that was circulated longer than any other Liberty Head $2.50 Gold Coin. Having incurred a lot of damage during its time exchanging hands, a Good Liberty Head $2.50 Gold Coin will quite appropriately show its age. The damage present on these coins is so great that you may even be able to find chipping, bending, and other signs of extreme damage.

When it comes to determining the price of the 1904 Liberty Head $2.50 Gold Coin, or any gold coin for that matter, the condition of the coin is everything. By using the chart below, you can accurately determine how much you can expect to pay for a Liberty Head $2.50 Gold Coin given its grade. The better the condition, the higher the price will be.