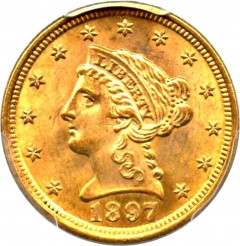 The 1897 Liberty Head $2.50 Gold Coins are popular collectibles among numismatists who enjoy classic 19th-century coinage. The U.S. Mint produced a little under 30,000 of these coins, creating one of the largest single-year totals of this denomination in nearly two decades. Even with such a substantial number of coins produced, a much smaller population of these coins survives today. Again, this is the situation with virtually all pre-1933 U.S. coins, which were melted in large numbers throughout the 20th century, particularly after the nation abandoned the gold standard in 1933.

Christian Gobrecht designed 1897 Liberty Head $2.50 Gold Coins, he also served as the U.S. Mint’s chief engraver for years. The 1866 Liberty Head $2.50 Gold Coins were made of a composition consisting of 90 percent gold and 10 percent copper, which is an alloy widely referred to as “coin gold.” They also weigh 4.18 grams and measure 18 millimeters in diameter, meaning they are about the same size as a modern U.S. dime. 1866 gold quarter eagle coins contain a total of 0.1202 ounces of gold.

This may not be news to many people, but coin collectors are known to be a meticulous bunch. Preferring only those coins that have been well-preserved over the years, collectors of coins pay close attention to the condition of every coin. The Liberty Head $2.50 Gold Coin is no exception to that, and though it is difficult to find in excellent condition, that much can definitely still be done.

Judging the condition of a coin is something known as grading, and is typically a process performed by a professional company. We know that not everyone has the time and/or money to send their coin(s) away for grading, so we have provided below a listing of the different coin grades and their associated characteristics.

Uncirculated: A Liberty Head $2.50 Gold Coin that has been graded as being Uncirculated is one that spent absolutely no time exchanging hands on the open market. Instead, these coins were kept away from sources of damage and wear, and appear today almost identical to the way they would have appeared in 1897. Gold coins that have remained in this type of excellent condition are also those that investors are readily trying to get their hands on.

Fine: A coin that is graded to be Fine is one that spent a few years being circulated, but was taken out of circulation before too long. These coins will show plenty of wear, but the overall integrity of the imagery and text will have been preserved. The heaviest wear will almost always be present near or on the raised parts of the coin.

Good: A coin that is graded to be Good is one that saw more circulation than any other type of Liberty Head $2.50 Gold Coin. Thanks to all these years being exchanged on the open market, the Good Liberty Head $2.50 Gold Coins will have plenty of scratching, chipping, and, on occasion, bending. While these coins are in somewhat poor shape, they are still sought after by collectors.

In order to determine the nominal value of an 1897 Liberty Head $2.50 Gold Coin, you really don’t have to look too much further than the condition. Because these coins are so old, no one is really anticipating that they will be able to find one that has been perfectly preserved. With that said, as the condition of a coin improves by even the most marginal amounts, its price can jump up dramatically. Below, there exists a chart that will help you price the 1897 Liberty Head $2.50 Gold Coin given its grade.