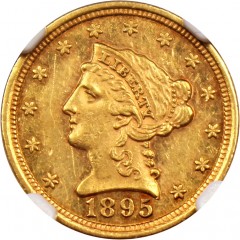 The 1895 Liberty Head $2.50 Gold Coins are collected by many numismatists who appreciate 19th-century coinage and enjoy widespread market appeal today. Only 6,000 of these coins were minted by the United States Mint, and far fewer still survive today. This is the case with almost all pre-1933 U.S. coins, which were melted in huge numbers during the 20th century, particularly after the nation left the gold standard.

Christian Gobrecht designed 1895 Liberty Head $2.50 Gold Coin which features a large head of Liberty facing left, wearing a wide coronet inscribed with the word LIBERTY. Her hair is pulled back in a bun and held in place by a string of pearls. Thirteen stars are placed around the periphery, representing the original colonies, with the date below.

As was touched on before, collectors are constantly striving to get their hands on the most well-preserved Liberty Head $2.50 Gold Coin. Knowing this, it should not come as too much of a surprise that collectors will closely analyze the faces of these coins in search of any and all imperfections. Even the smallest blemishes are noted by collectors.

Normally, people have their coins sent away for grading. This process involves a coin expert looking at the coin in question and assigning it a grade. This process is often expensive and time-consuming, so we have provided below a few specifications that apply to specific coin grades as to give you a better idea of what graded coins might look like.

Uncirculated: An Uncirculated coin is one that never spent any time exchanging hands. Thanks to this coin’s being kept in a safe place throughout its life, there exists no damage on the surfaces. All of the coin’s texture is intact, and the images and inscriptions can be made out quite easily. These pieces are the most desirable, but also some of the most expensive.

Extremely Fine: For a coin to receive this grade, it will have had to survive its short time in circulation without having incurred much damage at all. Only under close inspection can you see the generally light scratching and wear that is present on this type of graded Liberty Head $2.50 Gold Coin. These coins are also a prize for collectors as they are in mostly pristine condition.

Fine: A coin that is given a grade of Fine is one that spent a moderate amount of time being circulated across the United States. During its time in circulation, this coin will have been damaged a good bit. Complete with visible scratching and surface wear, these coins will show their age to some extent, but are not so beat up that you cannot recognize the images and inscriptions.

Good: This is the grade given to coins that are in rough shape. These were some of the most heavily circulated coins around, and will definitely show a good bit of damage. The type of damage you will find on coins graded to be in this condition can range from a lot of scratching, to deep chips, and on occasion bending.

When it comes to determining the value of a Liberty Head $2.50 Gold Coin, one of the biggest determinants is the condition it is in, or grade it has received. Because very few people anticipate finding a very well-preserved Liberty Head $2.50 Gold Coin, those few that have been decently preserved tend to fetch a high asking price. Below is a chart aimed at giving you a better idea of what these coins might cost given their grade.