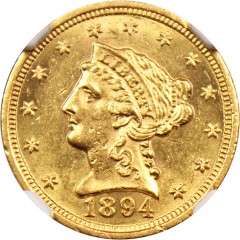 The 1894 Liberty Head $2.50 Gold Coins are historic gold coins that numismatists love collecting. The United States Mint made only 4,000 of these coins, and far fewer still survive today. Although the figures show 4,000 coins minted, unfortunately, only hundreds of these coins still exist today. This is a relatively tiny figure that was further reduced after the melting of these and other pre-1933 U.S. coins during the 20th century.

Christian Gobrecht designed 1894 Liberty Head $2.50 Gold Coins. These gold coins are made of a “coin gold” composition consisting of 90 percent gold and 10 percent copper. They have a weight of 4.18 grams, contain a total of 0.1202 ounces of gold, and measure 18 millimeters in diameter, which is roughly the diameter of a current U.S. dime. Unfortunately, because these coins are so old, so few of them have survived in excellent condition.

For coins like the 1894 Liberty Head $2.50 Gold Coin, which were produced over a century ago, the state of the condition means everything to a prospective collector. No one wants to add damaged, tarnished coins to their collection, so it makes sense that most every collector will closely examine the condition of a Liberty Head $2.50 Gold Coin before executing a purchase.

Normally, coins are sent away for grading in order to have their condition accurately judged, but not everyone has the available funds to send coins away for official grading, so we have provided specifications below to give you a better idea of what coins of a specific grade might look like.

Uncirculated: Coins that are graded to be Uncirculated are those that never spent any time exchanging hands or paying for goods. Instead, these coins were put into safekeeping almost immediately after they were minted. As a result of their being kept in a safe place, these coins have not suffered any of the damage typically associated with Liberty Head $2.50 Gold Coins of this age.

Fine: Coins that receive this grade are those that spent a decent bit of time being circulated. Due to their being exchanged over a moderate period of time, these coins have suffered a bit of wear. The biggest imperfections can be found in the smoothing of the coin’s design, which results in lesser detail of the imagery. This is why these coins are a bit less expensive.

Good: This is the grade given to coins that were circulated for exorbitant periods of time. After decades upon decades of exchanging hands, these coins have a lot of damage to show for it. Complete with chipping, scratching, and many other imperfections, these pieces really show their age.

When it comes to determining a price for the 1894 Liberty Head $2.50 Gold Coin, you really do not need to look much further than the coin’s condition. These coins are old, so most of them are going to be damaged to some degree, but those that have been even marginally well-preserved will fetch a high price. Below is a chart aimed at giving you a better idea as to what you might pay for an 1894 Liberty Head $2.50 Gold Coin given its grade.