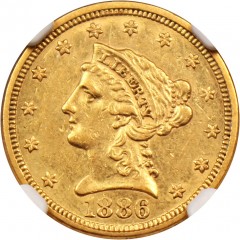 The Liberty Head $2.50 Gold Coins are a highly regarded and sought after gold coin produced by the U.S. Mint. These gold coin pieces were minted from 1840-1907. While the U.S. Mint in Philadelphia made 4,000 of these coins, far fewer exist today, meaning they’re relatively scarce. This is the case with most pre-1933 U.S. coins, which were melted in great numbers during the 20th century, and especially after the nation left the gold standard.

Because these coins ceased to be produced in 1907, many of the gold coins available on the market today will have noticeable signs of age-related damage. Since these coins have been handled extensively over the years and all of that handling takes a toll. You can still find a Liberty Head $2.50 Gold Coin in brilliant, uncirculated condition, however.

When collectors think about purchasing a coin such as the 1886 Liberty Head $2.50 Gold Coin, the first thing they will concern themselves with is the condition in which the coin is in. Condition not only affects value, but it also affect the general appeal of a collection, so collectors would like to buy those coins that haven’t been too heavily damaged.

Normally, judging the condition of a coin is something best left to the professionals, but not everyone has the time and money to send their coins away for grading. Understanding this, we have provided below a listing of the different characteristics of graded Liberty Head $2.50 Gold Coins as to give you a better idea of what graded pieces might look like.

Uncirculated: An Uncirculated Liberty Head $2.50 Gold Coin is one that never was released into the open exchange market. Instead of changing hands over and over for decades, these pieces were kept under lock and key and avoided most any damage. Even the mint’s original luster is still present on the coin’s faces.

Extremely Fine: A coin receiving this grade is one that was only put into circulation for a short period of time. During that time, the coin in question will have suffered some damage, but not enough to really take away from its appeal. Apart from some light scratching that is only visible under close inspection, these coins appear to be well-preserved.

Fine: If a coin is graded to be Fine, the coin in question is one that has spent a good bit of time being circulated. These coins will show a good bit of damage, but not so much that you cannot make out major identifying features such as the images and inscriptions.

Good: This is the grade given to coins that are in poor condition. These pieces, during their lives, were circulated for decades upon decades and have incurred a lot of damage during that time. For collectors, these are not the most desirable pieces, as seen by their relatively inexpensive asking prices.

In order to determine a price for the Liberty Head $2.50 Gold Coin, you must first look at its condition. In fact, the condition is one of the only determinants of the value of a gold coin. If the coin is well-preserved, it will be more expensive than a coin that has been, by comparison, heavily worn. Below is a chart that will help you understand what you might be charged for an Liberty Head $2.50 Gold Coin given its condition.