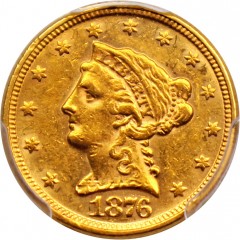 Designed by Christian Gobrecht the Liberty Head $2.50 Gold Coin consists of 90 percent gold and 10 percent copper. They have a weight of 4.18 grams, contain a total of 0.1202 ounces of gold, and measure 18 millimeters in diameter, which is roughly the diameter of a current U.S. dime.

When you are looking at a coin that is 150 years old, you have to take the coin’s condition into consideration. Typically, coin collectors will only seek to acquire coins that are in near-perfect condition and that have been very well preserved over the years. Locating coins in this condition can be difficult, however, given their age.

When looking at a coin’s physical condition, you are really trying to determine how that coin might be graded by a numismatic coin grading company. You can use the basic guidelines below to get an understanding of what a Liberty Head $2.50 Gold Coin might look like in various grades and conditions.

Uncirculated: Considered to be the top condition, coins in uncirculated condition have never been exposed to circulation and the corresponding exchanges and handling that come with circulation. Because of this, these coins have retained their original condition throughout the years and will appear to be freshly struck by the mint.

Extremely Fine: Just a notch down on the grading ladder, coins in extremely fine condition may have some extremely minor surface damage such as scratches. Nevertheless, these coins are still in excellent shape and are still desired by coin collectors. The damage is minor enough that it is usually only seen under close examination.

Fine: Coins in fine condition have been circulated, often for some time, and show visible signs of use-related wear and tear. These coins may have surface scratches or other imperfections. Any damage, however, is not significant enough to impact the coin’s images or details.

Good: Good is the grade assigned to the vast majority of Liberty Head $2.50 Gold Coins out there. These coins have been widely circulated and handled, and they may have serious imperfections such as dents, scratches, discoloration or worn down surfaces. Serious coin collectors tend to avoid coins in good condition, rather focusing their efforts on coins that have been well-preserved.

To get an idea of your coin’s price, you must first determine the type of coin. There were several types of the 1876 Liberty Head $2.50 Gold Coin produced and the type of gold coin will be a factor in its market value. The coin’s condition will also be a key factor when determining its value. Use the guide below to get an idea of what you might expect to pay for a Liberty Head $2.50 Gold Coin from 1876 based on its type and grade.