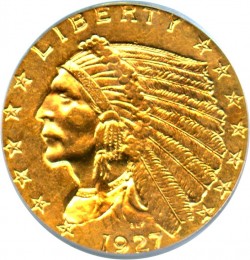 When it comes to collectors purchasing coins as old as the 1927 Indian Head $2.50 Gold Coin, the first thing that is always looked at is the coin’s condition. Overall, collectors will closely examine the coins looking for any major blemishes, but will be paying close attention to minor imperfections as well.

Normally, having a coin’s condition judged is something reserved for grading companies, of which many exist. Knowing that not everyone has the time and money to send their coins away for grading, we have listed below some of the characteristics that are tied to Indian Head $2.50 Gold Coins of specific grades.

Uncirculated: In Uncirculated condition, Indian Head $2.50 Gold Coins are in the best possible shape, especially for how old they are. These coins were taken directly from the production line and kept in safekeeping as to avoid any damage. As you might have guessed, these coins and their perfect condition are exactly what most every collector is looking for.

Extremely Fine: A coin graded to be Extremely Fine is one that only saw a limited amount of time in circulation. These coins will show some signs of their being exchanged over the years, but these blemishes will be few and far between and only visible under very close inspection. All in all, these coins are close to being in pristine condition.

Fine: To receive this grade, the coin in question will have definitely spent some time in circulation, but not a very large amount of time. Showing a good amount of damage, the poor condition of these coins as a result of circulation is apparent almost immediately. The most common type of imperfection found on these coins is the smoothing of the images and inscriptions.

When it comes to giving coins that are nearly a century old a price, you have to take into consideration the overall condition of the coin. Collectors want the coins that have been well-preserved, so those are the ones that will sell for high prices. The chart below should give you a good idea of what the cost of a graded 1927 Indian Head $2.50 Gold Coin given its condition.