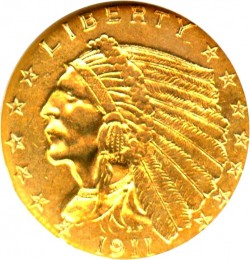 The 1911 Indian Head $2.50 Gold Coin was the first year the coin was minted at the Denver mint.
Philadelphia-minted coins from 1911 are generally about as common as pieces from most other years. However, the Denver issue, which was already struck in small numbers, faced melting like many of the other pre-1934 gold coins and is quite scarce in all grades today.

Keep in mind, relatively few Indian Head $2.50 Gold Coins were saved in the upper grades in the first place. Numismatists were not thrilled about the design, and the public feared germs would collect inside the incuse design of the coin. Today, Indian Head $2.50 Gold Coins are cherished by coin collectors, and the concerns over the hygiene of the coin were unfounded.

Numismatists are the type of people who nitpick when it comes to coins. Since the condition of coins is everything, you will find that collectors pick apart every aspect of a coin, looking for even the smallest imperfections. The logic behind this level of scrutiny is that only well-preserved pieces are preferred to be added to collections.

Uncirculated: An Uncirculated Indian Head $2.50 Gold Coin is one that spent no time in circulation and was instead kept in a safe place immediately after being produced. These coins will appear as though they were just minted, with no signs of wear and all of their images and inscriptions entirely intact. As you probably could have guessed, Uncirculated Indian Head $2.50 Gold Coins are the most sought after because of their sheer beauty.

Extremely Fine: A Indian Head $2.50 Gold Coin receiving of an Extremely Fine grade is one that spent only a limited amount of time exchanging hands. These coins will, at first glance, appear to be Uncirculated, but upon closer inspection you will be able to make out small imperfections on the faces, including extremely light scratching. Also a prize for collectors, these coins are in high demand.

Good: A coin that is graded to be Good is one that spent an exorbitant amount of time in circulation. As a result, you will see a lot of heavy scratching as well as plenty of other noticeable signs of wear and tear. Though not the most sought after, Indian Head $2.50 Gold Coins graded to be Good are most common and are some of the cheapest you will find.

In order to give the 1911 Indian Head $2.50 Gold Coin an accurate price valuation, the condition of the coin will play into the price you pay. As you could probably guess, coins that are in the best condition are the ones that will sell for the highest prices. Below is a chart that will give you a better idea of what you might be asked to pay for a 1911 Indian Head $2.50 Gold Coin given its condition.