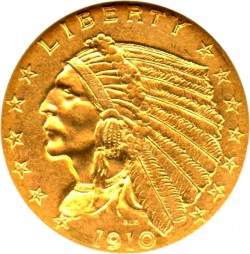 The 1910 Indian Head $2.50 Gold Coin is equally as scarce as the rest of the coins in this series. Bela Lyon Pratt designed the Indian Head $2.50 Gold Coin which featured a left-facing Indian on the obverse and a standing eagle on the reverse. This coin also features an incuse design, one of only two U.S. coins minted so far to feature a sunken design. The incuse coins were condemned by the public at large, fearing germs would be caught inside the sunken design. Obviously, those fears, were unfounded.

The Indian Head $2.50 Gold Coin, which was first introduced in the early 1900s, is one of these coins that has become extremely popular in the eyes of collectors. Of course, as far as collectors are concerned, the only pieces worth taking are those that have been well-preserved through the years. Unfortunately for most everyone, these coins were heavily circulated which means that they are often found in sub-par condition.

Because the Indian Head $2.50 Gold Coin was produced a century ago, collectors are wary about purchasing them simply because condition cannot be guaranteed. For this reason, you will see collectors searching high and low for those Indian Head $2.50 Gold Coins that have been well-preserved through the years. Unfortunately, it is not always such an easy task to find a well-preserved coin.

While most people would opt to send their coins away for grading to determine their official condition, most people have neither the time nor the money to do this. Instead, you will find below an outline of the characteristics of graded coins as to gain a better idea of what coins of certain grades look like.

Extremely Fine: To receive this grade, the coin in question will have only spent a very limited amount of time in circulation. These coins will, at first glance, appear to be absolutely pristine, but under closer inspection you will be able to find some minor imperfections and extremely light wear. Though not of the highest grade, Extremely Fine Indian Head $2.50 Gold Coins are still heavily sought after by collectors.

Fine: A coin given the grade of Fine is one that was in circulation for a good bit of time, but did not incur large amounts of damage. Though there will be consistent light scratching on the coin’s surface, it will not be so heavy that the integrity of the coin’s design will have been compromised. Even in this condition, Indian Head $2.50 Gold Coins are still prized in the eyes of collectors.

Good: A coin that is receiving of a Good grade is one that really and truly shows its age. These coins were the most heavily circulated of them all and will have things like major scratches, chips, and might even be bent. These are, as you might have guessed, also some of the most affordable Indian Head $2.50 Gold Coins around.

If you are attempting to determine the price you might be asked to pay for a 1910 Indian Head $2.50 Gold Coin, this is something that can first and foremost be determined by the condition the coin is. Naturally, if the coin has an excellent grade, it is going to fetch a higher asking price than coins that have been heavily damaged. Below, you will find a chart aimed at giving you a better idea of what you can expect to pay for a graded 1910 Indian Head $2.50 Gold Coin.