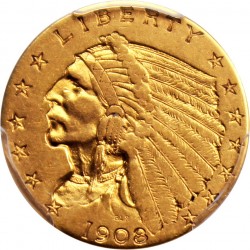 When the Indian Head $2.50 Gold Coin was first introduced, the coin was panned for its incuse design, which many people falsely believed would harbor bacteria. The coin’s design from the artistic standpoint was also disregarded by many numismatists, and therefore relatively few specimens of these coins were saved in the higher grades.

As is the case with any coin sought after by collectors, the condition of the piece is everything. Even though these coins are over 100 years old, there are still quite a few remaining in tip-top shape. Although difficult to find, it is easy to see why collectors are willing to pay top-dollar for an Indian Head $2.50 Gold Coin that has been well-preserved.

Good: Good is the grade given to an Indian Head $2.50 Gold Coin that has seen an extended period of time in circulation. The condition of these coins can best be described as poor, and the damage you will see will be extensive. Though these coins are in fairly poor shape, they are still great additions to any collection as they are more than 100 years old and quite rare.

In terms of determining a price for the Indian Head $2.50 Gold Coin, this is something that can first and foremost be done by viewing the condition of the coin and its associated grade. Naturally, it goes without saying that the more well-preserved a coin is, the higher the price is going to be. Below, we have a chart aimed at giving you a better idea of what to expect to pay for a graded 1908 Indian Head $2.50 Gold Coin.