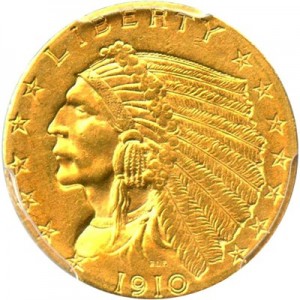 The Indian $2.5 Gold coin is one whose value is rising all the time. Whether it be due to the limited number of them available on the market, or the fact that gold’s market price is on the rise, these coins are becoming increasingly difficult to acquire for a reasonable price. Since they were released in 1908, there has been a good amount of time for these pieces to have been worn, damaged, and even lost. Being that there will never be more of these coins produced, now is as good a time as ever to get your hands on one.

For collectors, finding these coins in pristine condition is something that everyone desires. Unfortunately, the simple fact of the matter is that most of these coins will be found in conditions that vary and are often less than ideal. For this reason, you will see collectors being especially picky when it comes to the Indian $2.5 Gold coin.

What You Will Pay for an Indian $2.5 Coin

To put it simply, $2.5 Indian gold coins are not going to be cheap, even in poor condition. Being that these coins contain a decent amount of gold, their intrinsic value is always going to be high thanks to gold’s spot price being high. For this reason, the Indian is a bit different than older silver coins because they are not so easily affected by the ever-changing price of silver.

When it comes down to it, you can expect to pay no less than $150 for one of these coins. Some special editions can even run up to prices as high as $4,000 and greater. Generally, however, you will find that the average price for one of these pieces will be between $150 and $300, depending on who you are purchasing from. With these coins, it is important that you do a bit of comparison shopping because while one site may charge you $200, another dealer may be asking for far less than that for a similar coin.

The Most Sought After Indian $2.5 Coins

There are so many Indians that are considered to be particularly special in the eyes of collectors, but a few examples are sought after more than any other. Before delving deeper into that point, it is important to recognize that some editions of the Indian were produced with a few different types. Some coins made between 1908 and 1925, for example, had a few different types made and it is important that you specify which type you prefer as that will definitely influence the asking price. In 1914, there were two editions produced, and though they are from the same year, their asking prices are different.

As far as the absolutely most popular coins are concerned, you are looking at those produced in 1911. These coins exist nowadays in extremely limited amounts, and if you add that to their inherent value in gold, they are quite valuable. These are the pieces that are not going to be purchased by beginning investors, and are instead left for those with a lot more experience and a larger amount of money to spend on coins.

While it is impossible to say with any amount of certainty how much an Indian Gold coin is going to cost you in the future, we can say with some confidence that the future value is going to supersede the coin’s present value. Not only has the price of gold had a consistent uptrend over the past 100 years, the fact that these coins are no longer being produced means that they are only ever going to grow in value. Naturally, as time moves forward and less of these coins are available for purchase, their base price will start to rise. So while it is impossible to say that a specific coin will be worth a specific amount in 20 years, we can say that the value will increase more times than not.