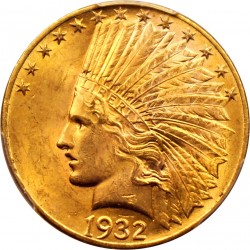 Under normal circumstances, a person who is looking to have the condition of their coins judged will defer to the services of a professional coin-grading company. This process, though helpful, is often costly. Understanding that not everyone has the time and money set aside to send a coin away for grading, we have provided below an outline of the different popular coin grades as well as their related characteristics.

Uncirculated: A coin that is determined to be Uncirculated is one that has spent very little time, and sometimes no time whatsoever, in circulation. These coins will appear as though they were just minted and will even have retained most of the mint’s original application of luster. In the eyes of collectors, Uncirculated Indian Head $10 Gold Coins are the most desirable, but are also some of the most expensive.

Extremely Fine: A coin that is graded as being Extremely Fine is a coin that has spent only a short period of time in circulation. These coins will appear to be identical to Uncirculated editions, but under close inspection you will be able to make out some small signs of wear—most often light scratching. For collectors, these coins are also a great addition to any collection.

Fine: In order to receive this grade, the 1932 Indian Head $10 Gold Coin in question will have spent a good bit of time in circulation but will have avoided many of the signs of wear associated for coins that have been heavily circulated. A lot of light scratching will be on the surfaces of the coin, but apart from that the signs of damage can vary dramatically.

Good: Good is the lowest grade a coin can receive, and is usually a grade reserved for those coins that have been extremely heavily damaged over the years. The surfaces of these coins will have been worn down such that the coin itself feels smooth to the touch. Though in poor condition, this shouldn’t be too much of a surprise when you take into consideration just how old these coins actually are.

When it comes to giving the Indian Head $10 Gold Coin a price, the condition of the coin is the biggest thing collectors look at. For those coins that are in excellent condition, the price you are going to pay is going to be a lot more than it would be for coins in poor condition. For the 1932 edition, the price is further affected by the fact that this was the last year the Indian Head $10 Gold Coin was produced. By referring to the chart below you can get a better idea of what you might pay for a ndian Head $10 Coin from 1932 given its grade.