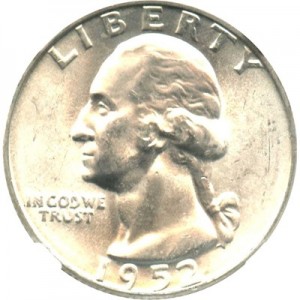 When the US Mint was first founded back in the late 1700s, its first and only task was to come up with the coinage that would be used by the citizens of the new United States. From then on, the mint began rapidly expanding not only to serve the needs of a growing country, but to also service the needs of foreign countries.

Whether it be the 1952 Washington Quarter or just about any other coin on the market today, collectors are always going to be concerned about the condition of the coin. This is why, when collectors first lay eyes on coins, they immediately assess the coin’s condition. Though not at all unusual, this practice shows just how much the coin’s condition means to collectors.

Uncirculated: A coin receiving of this grade is in superb condition and was not circulated at all. These coins will appear as though they just rolled out of the mint, though they are well over a half century old. With their beautiful appearance, it is no surprise that collectors scramble to get their hands on these coins. It is also no wonder that they are willing to pay some exorbitant prices just to do it.

Extremely Fine: A coin that is graded as being Extremely Fine is one that spent almost no time at all in circulation. Through its limited time in circulation, the coin in question will have been subjected to only very light damage. As you could have probably guessed, these coins are also quite the steal for most collectors.

Fine: Fine is a grade given to coins that were circulated for an extended period of time, but did not become overly damaged during that time. These coins will have plenty of surface wear, most times enough to cause the surface of the coin to be smooth to the touch. Apart from that, there will also often be consistent scratching of the surface.

Good: Good is a grade given to coins that are the most heavily circulated of them all. These coins have incurred a lot of damage over the course of their existence, and it shows. It will be difficult to make out the imagery and inscriptions on the coin, and the coin itself very well might be chipped or bent.

If you are aiming at pricing the 1952 Washington Quarter, there are a few different factors that you must pay close attention to. For one, because the coin had multiple types minted every year, the exact type of Quarter you own will play into the price. Secondly, the condition of the coin means everything and will play an even heavier role in determining price. Below is a chart aimed at giving you a better idea of what you can expect to pay for a Washington Quarter given its type and condition.