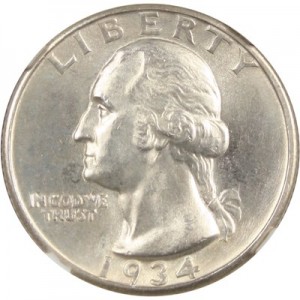 The US Mint was first founded shortly after the founding of the United States itself, and has since then made quite a name for itself. Now tasked with not only the production of US currency, but the production of many other nations’ currencies as well, the Mint is one of the largest in the world.

The Washington Quarter is still being produced today, but that does not mean that this piece cannot be seen as a collector’s item. In fact, collectors scramble to get their hands on early editions as many of the coins produced through the first 30 years were composed of silver.

When you are speaking of the 1934 Washington Quarter, or any other coin from that era, collectors will first and foremost analyze the condition of the coin. Because these pieces were used so much and on a daily basis, the condition you will find them in varies greatly from coin to coin.

Normally, it would behoove you to send your coin to a professional grading service so that they can officially assess the condition of the coin. Understanding that not everyone has the time and money to send their coin away for grading, we have provided below an outline aimed at giving you a better idea of what graded coins will look like.

Uncirculated: An Uncirculated Washington Quarter is one that never spent any time exchanging hands on the open exchange market. These coins have been well-preserved for decades on end and appear as though they were just recently minted. As you could have probably guessed, these are also some of the most sought after types of Washington Quarters.

Extremely Fine: If the Quarter you have is graded as being Extremely Fine, it is one that spent almost no time at all being exchanged. These coins will, at face value, look to be in perfect condition, but upon closer inspection you will see that there are quite a few imperfections, just none that are major. These coins are also highly sought after by collectors who are especially stringent about the condition of their coins.

Fine: This is the grade given to coins that were circulated relatively extensively, but were somehow able to avoid incurring a lot of damage. These coins will appear to be mostly intact, but if you look closely you can notice that the raised aspects of the design are worn down a bit due to the exchanging of hands over the years.

Very Good: If a coin is receiving of a Very Good grade, this is a nice way of saying that it was circulated for an extended period of time and incurred damage, but the designs are still able to be made out without too much trouble. All in all these are great pieces for someone who is looking to complete a set of Washington Quarters, but not necessarily the best option as far as pure aesthetics are concerned.

If you are trying to determine how much you might be asked to pay for a Washington Quarter, the two things you must first assess are the type of coin and condition it is in. Because multiple types of the Quarter were produced annually, the scarcity associated with that specific type will drive the value. Secondly, it only makes sense that those well-preserved coins are the ones that will sell for the highest prices. Below is a chart outlining what you might be expected to pay for a 1934 Washington Quarter given its type and condition.