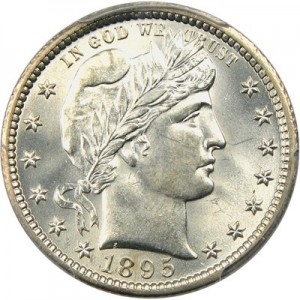 From the earliest days of the US Mint, quarters have been trucking off the production lines. These 25-cent coins have been a useful part of American coinage for well over 200 years, and remain in circulation today. One of the lesser-known quarter types is the Barber, which was minted during the last 8 years of the 19th century through the first 15 years of the 20th. These coins, though only minted for a relatively short expanse of time, are incredibly popular in the eyes of collectors. This only grows truer as the coin in question’s condition improves.

Being minted for such a short period of time, one might be led to believe that the Barber is an expensive coin to acquire, but this is not at all the case. In fact, you can sometimes find these coins for prices that dwarf those of quarters that were produced after the Barber.

What You Will Pay for a Barber Quarter

The asking price for a Barber is variable and dependent on a host of different factors. First and foremost, the year in which the coin was minted means everything and is the first way to determine an asking price. While one year’s coin may be incredibly valuable, a coin minted just one year later may sell for next to nothing. Generally, the starting price for a Barber is below $10, but can range as high as hundreds of dollars if the coin is in excellent condition.

Another factor helpful in determining the price of a coin is the type of Barber you own. Seeing as up to three different types of this quarter were minted each year, the type you have will carry its own price. The 1892 O, for example, will sell at prices over $75 while the S version of the same year quarter will sell for nearly $200 in the same condition. By putting in the research and finding out more about the coin you are about to purchase, you will be able to understand why the price is what it is.

The Most Sought After Barber Quarters

The most sought after Barbers are without a doubt those coins that have some sort of error or a mintmark that is deemed to be unique or rare. Unfortunately, thanks to the short expanse of time during which these coins were minted, finding a rare version is not so easily done. Apart from rare versions, the most sought after are without a doubt those Barbers that have withstood the test of time. The coins that are in great condition are highly sought after because of their sheer beauty relative to their age.

When it comes to levels of demand, they change very quickly with these coins. As was stated above, a certain type of coin produced one year may sell for prices that dwarf the price being asked for a different type coin from the same year. This is why putting in some time to do research becomes so vital for collectors.

Determining the future value of a coin is something that is best left to the experts. With that said, it is safe to say that these coins are only ever going to grow more expensive. As time moves forward and fewer and fewer are available for purchase, the average price paid for a Barber will naturally rise. We have seen this happen in the past with other coins and are already seeing this happen with earlier versions of the Barber.

Knowing this, it goes without saying that now is the absolute best time for you to get your hands on a Barber Quarter.