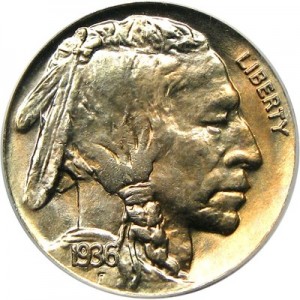 As far as US Mint coinage goes, few series are more popular amongst collectors than the long line of Buffalo Nickels. First produced shortly after the turn of the 20th century, these coins were incredibly useful during their time in circulation, which helps make them extremely valuable nowadays. Collectors the world over are constantly trying to get their hands on these coins, and get their hands on those pieces that have been preserved through the years.

Unfortunately, because these coins were so heavily circulated and so useful, very few have survived the years in excellent shape. Still, because this is one of the last Buffalo Nickel’s produced, many more of these have survived than previous years.

When a collector expresses a desire to attain a coin as old as the 1936 Buffalo Nickel, it goes without saying that that person wants to find a coin that is in great shape. This is not always an easy task, and is part of the reason why collectors, before doing anything else, will assess the overall condition of the coin in question.

Under normal circumstances, the process of judging the condition of a coin is known as grading and is something that is completed by a professional coin grading company. Though you may not have the time and money to send your coin away for grading, you can use the specifications below to gain a better idea of the qualities coins of specific grades will have.

Uncirculated: An Uncirculated Buffalo Nickel is one that was placed into a safe spot shortly after it was produced. Because these coins never spent time on the open market exchanging hands, they do not show the signs of wear you will find present on most Buffalo Nickels. Instead, what you will find is a coin that has been well-preserved so much so that even the mint’s original luster remains intact, giving the coin a nice shine.

Fine: This is the grade given to Buffalo Nickels that spent a decent amount of time exchanging hands. These coins will show some light scratching and other blemishes, but will not be so damaged that their imagery or inscriptions are difficult to make out. The heaviest damage can be found near the cheekbone of the Indian and near the front legs of the Buffalo.

When it comes to giving the 1936 Buffalo Nickel a price, this will depend first and foremost on the condition the coin is in. Condition is everything for collectors, so you can expect that this is one of the biggest factors affecting the price you pay for a coin. Secondly, the price of the coin will depend on the type of Nickel it is. Because multiple types of Buffalo Nickels were minted most years, this is something to pay attention to. The chart below will give you a good idea of what you can expect to pay for a graded Buffalo Nickel given its type.