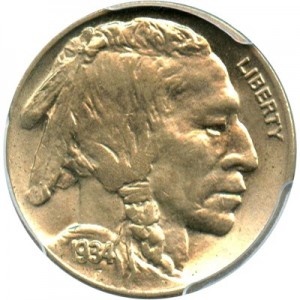 The US Mint has been tasked with producing the coinage of the United States since shortly after the country was founded. Through the years this world-renowned mint has produced many attractive coins, but few more so than the Buffalo Nickel. Minted throughout the early 20th century, Buffalo Nickels that have survived the years are of incredible value to collectors.

Buffalo Nickels, regardless of their condition, are a prized catch for any collector, but it must be stated that collectors without a doubt only want to get their hands on those coins that have been well-preserved through the years. Unfortunately, because of hos popular these coins were to use, not many have survived in great shape.

As soon as a collector catches wind of the possibility of acquiring a coin as old as the 1934 Buffalo Nickel, the first thing they will inquire about is the condition of the coin in question. Because most Buffalo Nickels were fairly heavily circulated, it goes without saying that many of them are not in the best condition.

Typically, the process of judging a coin’s condition is done by a professional coin grading service. With the specifications below, however, you can look at a Buffalo Nickel and almost immediately be able to tell what kind of grade it would receive.

Uncirculated: An Uncirculated Buffalo Nickel is one that never exchanged hands after it was minted. Instead, the coin was likely placed into safekeeping for an extended period of time and, because of this, avoided any noticeable damage. Even the luster, which was applied by the mint at the time of production and gives the coin its shine, will have been mostly preserved through the years.

Fine: This grade is given to 1934 Buffalo Nickels that were circulated for a good amount of time. These coins will show plenty of scratching and other signs of wear, but the coin’s inscriptions and images will have survived mostly intact. The heaviest wear will most often be found near the buffalo’s front legs and/or near the cheekbone of the pictured Indian.

Good: If a Buffalo Nickel receives this grade, it means that the coin was circulated extensively. During its time exchanging hands, this piece will have incurred significant, noticeable damage. Heavy scratching, chipping, and on some occasions bending of the coin can be noticed. These are far and away the most affordable types of Buffalo Nickels.

When it comes to giving Buffalo Nickels a price, there are two things you must take into consideration; the condition and the type. The 1934 Nickel had two different types minted, and each type carries with it its own inherent value. By assessing the type and condition, you will be able to gain a better understanding of how much the coin in question will sell for. The chart below will provide you with a good idea of how much these coins are selling for today.