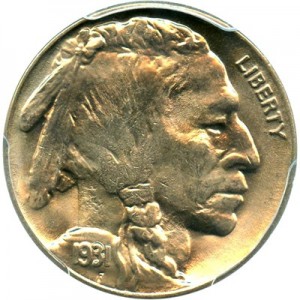 The US Mint has been producing 5-cent pieces since shortly after the Civil War and the production of these coins has carried right on over to today. One of the most popular styles of 5-cent piece coins is the Buffalo Nickel, which was primarily produced during the first parts of the 20th century. This iconic coin is popular amongst both collectors and investors.

Coins that are as old as the 1931 Buffalo Nickel, as stated stated, often show extensive signs of damage. For collectors, damage is not always a deal breaker, but because the spectrum of damage for these coins is broad, collectors often try to acquire those coins that have suffered the least wear and tear.

Normally, the process of inspecting the condition of a coin is performed by a professional coin grading service, but with the specifications below you can gain a good idea of exactly what the qualities of a 1931 Buffalo Nickel of a certain grade are.

Uncirculated: A coin graded to be Uncirculated is one that never saw time exchanging hands or paying for goods and services. Thanks to their preservation, these coins will show absolutely no signs of wear and will appear to be in pristine condition. Even the luster that was applied by the US Mint and gives the coins its shine is still present on both of the coin’s faces.

Extremely Fine: If your coin is given the grade of Extremely Fine, this means that it was circulated for no more than a short period of time. Though the piece did exchange hands, the damage it incurred during that time is light. Overall, the coin’s faces will show nothing more than some extremely light scratching. The coin will have probably lost most of its luster.

Fine: Coin’s given this grade are those that saw a decent amount of time in circulation and incurred some decent damage during that time. The heaviest damage usually can be found near the front legs of the Buffalo and near the Indian’s cheekbones. You will notice that many of the raised regions of this coin have been smoothed a bit due to the changing of hands over the years.

Good: This grade will be given to those coins that have been circulated for an extremely long period of time. The damage present on both faces will be quite extensive and may be so bad that you will notice chips, deep scratches, and other signs of wear. The faces of the coin will be smooth to the touch and lacking texture.

When it comes to giving the Buffalo Nickel an accurate price, the way to determine this is by taking notice of a few different aspects of the coin. First and foremost, the grade/condition of the coin will play very heavily into how it is priced. Because collectors are eager to attain those coins that are in excellent condition, they will naturally pay more for those coins than the coins that are in sub-par condition. The chart below will give you a decent idea of what you can expect to pay for a 1931 Buffalo Nickel given its condition.