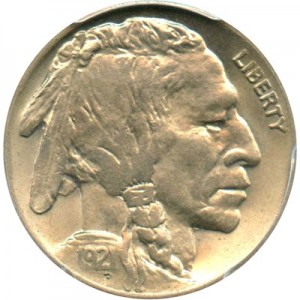 Generally speaking, collectors go crazy over coins produced by the US Mint throughout the late 19th and early 20th centuries. The Buffalo Nickel coin series falls into the latter of the two time periods, but is one that collectors are constantly eager to get their hands on. Unfortunately, collecting these coins becomes a bit difficult once you realize that there were three different varieties of the coin minted with most annual releases.

For coins that are as old as the 1921 Buffalo Nickel, collectors are constantly concerned about the coin’s condition. Like was previously stated, these coins were used frequently and exchanged hands quite often. Because of this, those pieces that have survived the years can be in any type of condition.

For a collector, the process of judging the condition of a coin is known as giving the coin a grade. Grading is a unique process often executed by a coin expert, but with the specifications below you can attain a good idea of what coins of a certain grade will look like.

Uncirculated: A coin graded to be Uncirculated is a coin that spent absolutely no time exchanging hands. These coins will show no signs of wear and will be in perfect condition. The condition of these coins is so excellent, in fact, that even the mint’s original luster will have been preserved, giving the coin a shiny appearance.

Extremely Fine: In Extremely Fine condition, the Buffalo Nickel will show only very minimal signs of wear. You will be able to see some light scratching, but the overall texture and appearance of the coin will remain intact. Even some of the mint’s original luster may be hanging around to give the coin a nice appealing shine.

Fine: A coin given this grade is one that saw a good amount of time in circulation and has the signs to show it. Complete with a good amount of scratching and other imperfections, this coin will appear as though it exchanged hands for quite a few years. The most significant wearing will be taking place upon the buffalo’s front legs and near the cheekbone of the Indian.

Good: A coin given this grade was circulated more than any other. These coins will have a lot of scratching, so much, in fact, that the coin’s imagery and inscriptions may be somewhat difficult to make out. Because these coins were used on a day-to-day basis by so many Americans, this is the grade given to most surviving 1921 Buffalo Nickels.

When it comes to giving the Buffalo Nickel a price, the first thing you must consider is the type of coin it is. Two different varieties of Buffalo Nickels were minted in 1921 and each of them have their own scarcity and level of demand by collectors. In addition to the type, you must also consider the grade of the coin. The chart below is designed to give you a better idea of what you might be asked to pay for a 1921 Buffalo Nickel of a certain grade and type.