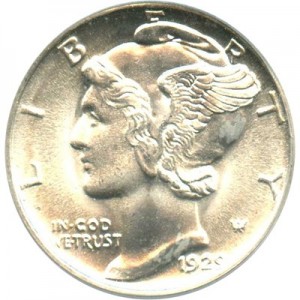 The US Mint has been producing the coinage of the United States for some time now. Since shortly after the country was founded, coins have been rolling off the mint’s presses, many of which have risen to popularity once their production was ended. A perfect example of this is the Mercury Dime, which has recently risen to new levels of popularity.

For collectors, these coins are extremely attractive because putting together a whole collection is quite the challenge. That challenge grows when you find out that most Mercury Dimes were heavily circulated and suffered a good bit of damage as a result.

When it comes to collectors and their coins, attention to detail is the name of the game. The reason for this is due to the simple fact that most every collector would like to add only the finest coins to their collections. Unfortunately, the popularity of these coins when they were in circulation meant that many of them were heavily damaged by the time things were all said and done.

For collectors, it is important that they pay extra attention to what the condition of a coin is. Usually, collectors will have their coins sent away for grading, but not everyone has the time and money to do this. Because of that, we have provided grading specifications below that give you a better idea of what coins of certain grades might look like.

Uncirculated: Uncirculated Mercury Dimes are those that, after they were minted, did not ever enter into circulation. Instead, these pieces were put in a safe place where they effectively avoided any and all damage. When looking at Uncirculated coins, it is quite difficult to tell the coin’s age simply because it has been subjected to absolutely no damage whatsoever.

Extremely Fine: A coin that is graded to be Extremely Fine is one that only spent a very minimal amount of time being circulated. For the most part, these coins will appear to be in mostly pristine condition, but under close inspection you will be able to make out some imperfections. All in all, these coins are still quite attractive for most collectors.

Fine: A coin that is graded to be Fine is one that suffered only a bit of damage during its relatively extended period of time in circulation. You will see on these coins that the imagery and inscriptions have been worn down due to the changing of hands over the years. Still, the major features of the coin are able to be made out without too much trouble.

Good: This is the grade given to those Mercury Dimes that are in absolutely horrid shape. These coins were the most heavily circulated of all and, as a result, suffered the most damage. Chipping, bending, and heavy scratching are all characteristics of coins of this grade.

When it comes to giving the 1929 Mercury Dime a price, you must consider two factors. For one, the type of coin you have matters. Because most years saw multiple types of Mercury Dime minted, the scarcity of the specific type of coin will play into the value. In addition, the condition in which the coin is in will affect value. Naturally, those coins that have been well-preserved over the years will sell for higher prices than coins that have been heavily damaged. The chart below is aimed at giving you a better understanding of what you might be asked to pay for a 1929 Mercury Dime that has been graded.