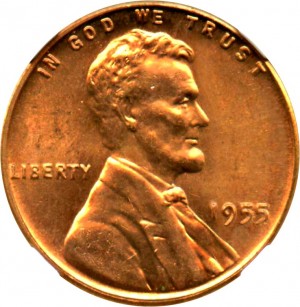 The Lincoln penny is one of the most recognizable American coins due to its imagery and prevalence in daily life. No matter who you are or where you are from, the penny is something you are likely more than familiar with. The 1955 Lincoln, however, is especially sought after by collectors, and this is something that only grows truer as its scarcity grows.

The obverse side of the Lincoln penny features in the middle the detailed profile of Abraham Lincoln. On the left hand side of the obverse you will notice a raised inscription that reads “Liberty,” while the opposite side features the 1955 year of minting. Inscribed across the top of the obverse is the phrase “In God We Trust.”

The coin’s reverse doesn’t feature any imagery in the center but, rather, two raised inscriptions. One of the inscriptions reads “United States of America,” while the other marks the “One Cent” face value. Along the left and right outer edges of the reverse are two single stalks of wheat, which explain why the coin is often referred to as a “Wheat Penny.” Finally, the Latin phrase “E Pluribus Unum” is inscribed across the top of the reverse.

For coins as old as the 1955 Lincoln penny, simple owning one is not good enough. Instead, collectors strive to get their hands on those pieces that have been well-preserved and graded. Below, we will outline the different coin grades as well as what they mean for the 1955 Lincoln penny’s condition.

Uncirculated: If a coin is determined to be Uncirculated, this means that the piece was preserved from the day it was minted. Having never exchanged hands on the open market, these coins will have avoided any and all of the damage commonly associated with coins so old. As such, Uncirculated 1955 Lincolns are amongst the most popular in the eyes of collectors.

Extremely Fine: Extremely Fine is the grade given to coins that were likely never circulated, but are not entirely free of damage. To be fair, the damage present on the surface of these Lincoln pennies is small and not always able to be viewed with the naked eye, but they will be uncovered and seen during the grading process.

Fine: Fine is the grade given to coins that were extensively circulated, but have not been too heavily damaged. Due to what was more than likely decades of being circulated, these coins will show signs of wear such as light scratching and smoothing, but their condition will still be decent. All of the raised lettering and imagery will be intact and discernable with the naked eye.

Good: A coin that is determined to be of Good grade are those that have been heavily damaged and circulated. From deep scratching to the complete smoothing away of some of the raised imagery, these coins will definitely show their age.

If you are attempting to determine the nominal value of a 1955 Lincoln, you will have to take into consideration a few different items. For one, because there were up to 3 different coins produced during a single year, the exact type of Lincoln penny you own will play into its value heavily. Secondly, there is the grade. The grade corresponds with the penny’s condition, and the condition is a major factor in determining the value. Below is a chart aimed at helping you figure out how much a Lincoln penny from 1955 is worth given its condition and type.